Facebook Instagram Youtube Twitter Patreon Shopping-bag
Menu
I'm doing much better than in the last entry; sometimes I just need to melt down, I think. Yesterday, I can't remember exactly what I did, but I think it was at least vaguely productive on the household front. Today, we're going to Venu and Sendhil's wedding this afternoon, fun! And in the meantime, I'm reading home design books and thinking about Kavi's room some more.

These are two of the bedrooms we have to work with -- the first is 12x11, and the second is 13x11. I'm pretty sure I want to switch them, first of all -- make the girl's room the boy's room, and vice versa. Mostly because I think a canopy bed would be overwhelming in the center of the smaller room with the bay window, but should fit reasonably well in the other room, especially if it's a twin-size bed, instead of the full-size they currently have there: 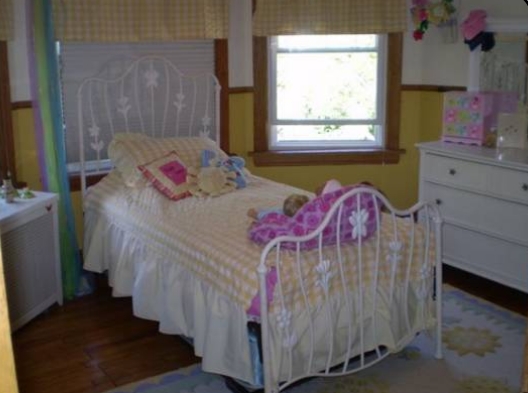 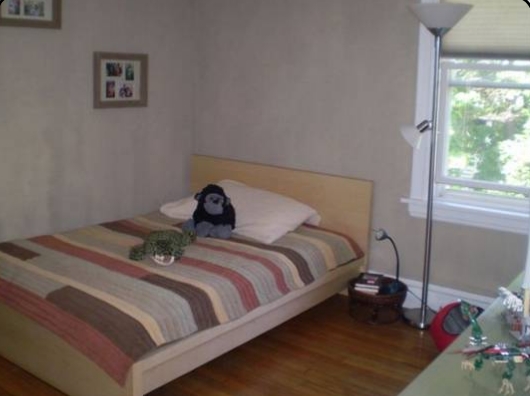 So if that second room will be Kavi's, there are some things I want to do to it. As you can see, in the bay window room, they have nice woodwork around the windows, and a chair rail. But in the other room, the wood trim is all painted white. No no no. I have no idea why it's painted white -- given all the lovely wood elsewhere in the house, I'm thinking maybe that was the previous homeowners' choice, and the current ones just didn't get to stripping it? Is there some other reason you can think of why this is the only bedroom with painted woodwork? Because right now, my inclination is to strip all that back to wood. Or rather, have a professional do it, because I gather it's a somewhat harsh chemical process and pregnant me is probably not supposed to be doing that kind of thing right now. Painters strip paint off too, right? Is it hideously expensive, having them do that to a room? I don't actually know much of anything about stripping wood, so please inform me if you know anything about it!

Once that's done, I'd ideally like to add a chair rail to match the one in the bay window room. I think that'd add a nice harmony to the room. Is that something the painter could do, or do we need a separate handyman to do that?

And then I'd like to paint the room orange. I think a nice deep-ish orange below the rail, and a much lighter tone above the rail. Probably carried up into the ceiling (or even doing the ceiling in a third, even lighter tone). What do you think? Part of why orange appeals to me is that I can then use pink and turquoise and green accents through the room now, but if Kavi rebels against the girliness when she gets older, we could potentially keep the orange walls and accent with brown/green/other more neutral tones later. Or even for some reason we decide to move the boy in there at a later date -- orange and brown I think is a pretty acceptable boy color combo, right?

I played around with paint colors a bit, and got this combo (I think it's Benjamin Moore's orange juice and tangelo). Imagine that instead of the trim dividing the wall from the ceiling, that it's moved down to chair rail height, so the lighter color starts about halfway up the wall). Sadly, their little room visualizer didn't let me change the color of the curtains or bedding, so you'll need to imagine those in bright pink, turquoise, and light green: 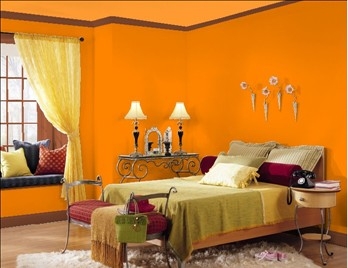 What do you think? Too much?

7 thoughts on “I’m doing much better…”