Facebook Instagram Youtube Twitter Patreon Shopping-bag
Menu
Kev and I alternate cooking weeks, and his last week he made mostly vegetarian. I'm not quite there yet, but yesterday I learned a new lentil curry I actually like (from the Sri Lankan section of the Charmaine Solomon cookbook), and we had a vegetarian Indian meal with friends, and it was good. We're aiming towards meat/chicken/fish each once a week, perhaps, or less. A big change from having meat at every lunch and dinner! It's both notably cheaper and healthier for us, so a win-win, I think. But still weird to wrap my mind around. Yes, I know most of the world hardly ever eats meat, but I'm a spoiled American, and I find it a little difficult to feel full unless there's some meat in the meal. It's totally a stupid mental block; I'm working on it.

Dinner was with Venu and her new beau, Sendhil, and Nilofer and Shashi and their girls. I don't know if I mentioned here that Nilofer's family is moving to the Bay Area. We are not pleased. But Shashi got his dream job, so I suppose we have to try to be happy for them. Pfui. We did have a great time at dinner last night -- a fair bit of Sarah Palin snarkiness mixed in with much kid discussion. Also food. I made: saffron-sultana rice, lentils, spicy potato, mushrooms, carrots (came out really good -- I used half a can of coconut milk instead of regular milk for a change and so much better than normal!), beets, beet leaf salad, and chili-lime mangoes. We have a lot of leftovers, because apparently, I am incapable of cooking for less than an army. When will I learn? 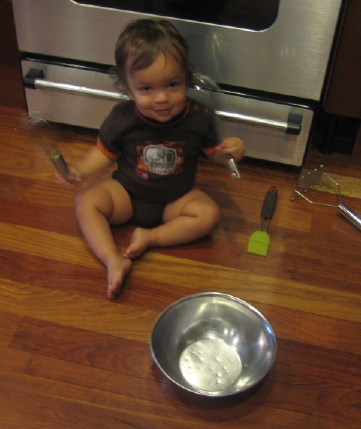 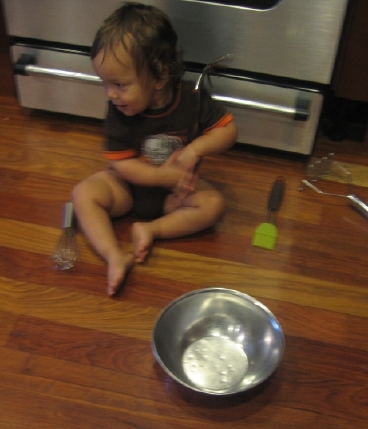 Don't bother her when she's in the throes of creation! 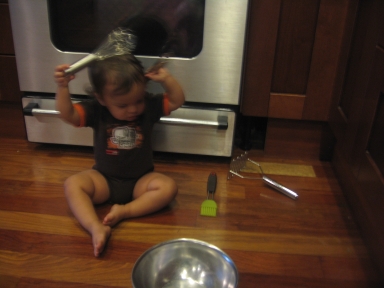 One thing we noticed last night is that Kavi is notably quieter and mellower than both of Nilofer's girls (one younger, one older) -- which is funny, since she seems like such a handful to us. But in contrast with other kids, the difference is striking. I wonder how much of that is personality and how much is genetics. I suppose if we have another kid, we might get more of a clue. Although I'm a little scared -- having three kids in the house at once last night? A little overwhelming, and more -- a little loud! 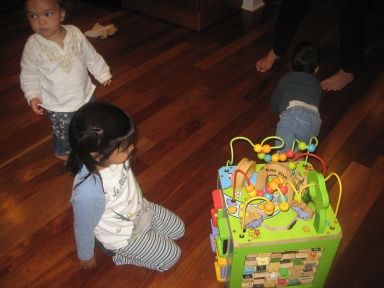 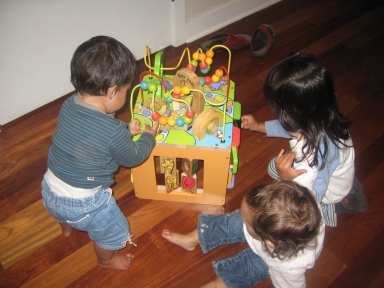 Today, cleaning lady comes (yay), babysitter comes for the morning (double yay), and I try to catch up on backlogged e-mail and maybe write a little piece for the version of Yoni ki Baat that Rasaka's putting on in January-ish -- they said they could use some more depth/variety in their pieces, so I was thinking I might try to write something about vaginal birth, or the lack thereof. We'll see. In the afternoon, Sugi Ganeshananthan's stopping by (in town for a wedding) and letting me have her comments on Arbitrary Passions. Yay, writer friends. :-)

3 thoughts on “Kev and I alternate…”