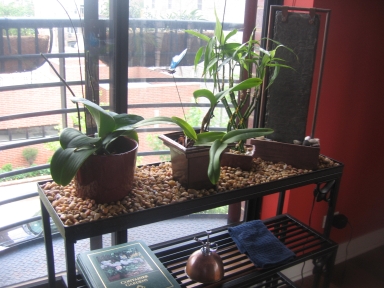 I'm not sure what it is about gardening that pleases me. It's a lot of labor, for an ephemeral and slight reward. But I think that's the wrong way to think about it -- it's not the end result that you love, or not that alone, but the process. I guess it's the same with cooking, or writing -- sometimes, what you're doing is just getting to dinner, getting to the finished manuscript. But if you manage to approach it with mindfulness, you realize it's the process that you actually love. Slicing mushrooms, so clean and simple. Writing a line of dialogue that is exactly what that character would say. Stirring a risotto to perfect creaminess. Each action filled with grace.

I woke up early this morning and decided to work on my orchids. That whole shelf had picked up a powdery mildew -- ugly to look at, sticky and gross to touch. So I took 'em all down (two orchids and a little bamboo), repotted and pruned the phaelenopsis, washed everying, found a better-size cachepot for the cattleya, even fertilized (which I have never actually done for these poor orchids). It took about fifteen minutes, and the whole process was a pleasure -- sluicing warm water over the leaves to wash away the mildew, trimming the rotten roots, pulling away the sodden old spaghnum moss and replacing it with fresh orchid bark (which I hope the phaelenopsis likes just as well). Now they all look so much happier; maybe they'll actually bloom again someday.