Facebook Instagram Youtube Twitter Patreon Shopping-bag
Menu
Yesterday was my day with Kavi while Kevin worked. Honestly, I'm just not suited to being with a kid full-time. Even with him coming down a couple times to give me a fifteen-minute break, by the end of the day, I was pretty frayed -- and that was with Kavi in a relatively good mood most of the day. (She isn't eating as much solid food as we would like, which is frustrating.)

One trick that helps -- taking her and Ellie to the park. Kavi will happily sit in her stroller for a good half hour, watching the world go by (it helps that our closest park is right next to an El train, so every ten minutes or so, an exciting train goes by for her to point at). Also, the park usually has dogs and other kids. And I can sit and read, so that's nice. Or run around with Ellie, which makes Kavi laugh. Really, the kid is pretty cute -- I'm just so glad that I don't have to be with her every waking moment. I'd go nuts.

I honestly don't know how my mother did it. She's not a reader, and she had no internet to distract herself with. She didn't even own a t.v. when they first came to this country. My dad was gone working long hours at the hospital. She didn't know how to drive. She was scared of her white neighbors, and her only friends were other Sri Lankan immigrants, who lived an hour or more away. Her entire family was in another country on the other side of the planet. So it was just her, in a little apartment, with two-year-old me -- cooking, and cleaning, and watching the baby. If I had to do that, day after day after day after day after day...well, I'd break something, that's for sure. Hopefully not the baby. 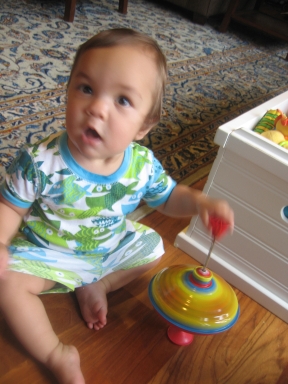 Kavi can spin her ladybug top on her own now. Sometimes. It helps that it has a nice stable bit on the bottom. I found this at Land of Nod, and they had two kinds -- one with a pointy bottom (more true to the original 'top' idea, I think), and one with a stable bottom. The pointy bottom would just frustrate her now, I think -- it frustrated me! :-) Kavi loves her top; I think it's her current favorite toy. 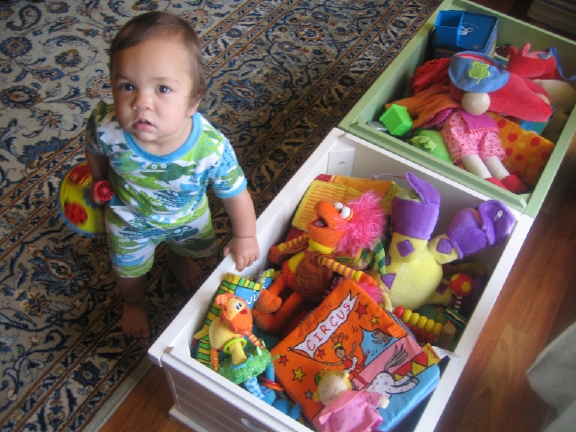 Not that she has any lack of toys to choose from. Other favorites at year 1ish: her Lotta dolly, which she carries around with her, and her geometric stacker. She can't actually get the pieces back on the stack yet, but she loves it when you do it, and she likes taking them off and throwing them around. 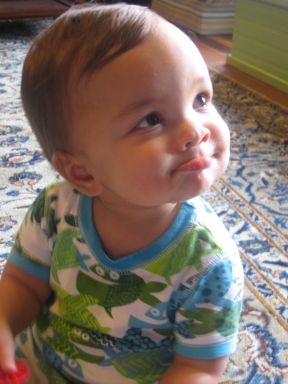 I just thought this was a funny face. :-)

2 thoughts on “Yesterday was my day…”