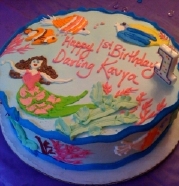 I had planned to write you a letter for your first birthday, kunju, and for every one thereafter, until you turn twenty-one. But here I am, a day late already. I hardly saw you on your birthday; I left early, while you were still sleeping, to go to work, and by the time I came home, late at night, you were already down for the night in your crib. I'm afraid this won't be the first time that I don't live up to my ideals as your mother, so you might as well get used to it now. I can take a little consolation that you won't notice that I missed your birthday, this first time around -- you probably didn't miss me at all, though I sure did miss you. I called you and sang your current favorite lullaby, "The Lion Sleeps Tonight" over the phone; did you hear me? Did you know it was me? Hopefully next year, I'll be there for you, baby.

And it's not as if you weren't celebrated, little girl. You had two birthday parties, one in Chicago with lots of friends, and one in Connecticut with lots of relatives. There were balloons, which you loved, and cake, which you weren't so sure about, and eventually presents, which you were almost too tired to unwrap. Your favorites were the bead maze and the soft knight on his rolling horse. There were lots of hugs and kisses -- sometimes more than you wanted; you seemed a little overwhelmed by all the people. But your daddy and I kept sneaking you away to be alone with us, and then you were your smiley self again, full of giggles and snuggles and eager to show off all your tricks. This is some of what you can do right now: 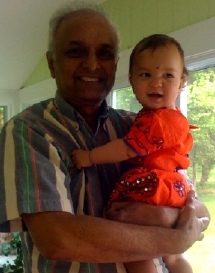 All in all, we are very impressed with your accomplishments. I wish you could see how excited we get when you do something new, as if no baby in the world has ever done that new thing before. Your grandparents are even worse. You're the first grandchild in both families although your cousin Brooke was a close second, and you are very much adored. You are regularly assured that you are the cleverest, cutest baby in the world, in both English and Tamil. We would say prettiest too, but a) we don't want to teach you to obsess about your looks, and b) you're still somewhat lacking in hair. I'm sure it'll show up eventually, though, so don't worry.

Mostly, you are just a very good baby, Miss Kavya. To be honest, we had a rough time at first, since you refused to breastfeed, and took an awfully long time to start sleeping through the night. There were days, especially in the first weeks, when your daddy and I seriously wondered if we'd made a terrible mistake, if we were just too old and tired to do this parenting thing. Those first six weeks were the hardest thing we'd ever done, and surviving them was like running a gauntlet. We weren't sure we'd make it.

But then you smiled at us, and then you giggled, and snuggled into us, and learned who we actually were. With every passing day you became more of a real, fascinating little person. We can't wait to see who you'll become. And while I can't speak for your daddy, I can say this for myself -- I absolutely know that I did the right thing for me in deciding to try to have a child. Becoming a mother has been the biggest transformation in my life, and I suspect I will spend the rest of my days trying to put this experience into words. You make the world new, Kavi, each and every day.

love and hope and kisses,
Amma