Menu
Okay, I was totally wrong; we did no unpacking yesterday. But Kevin promises me that we'll get it done today. Fingers crossed. He did make us a nice dinner yesterday (roast little hens, roast winter squash, roast potatoes), so I forgive him much. That marks the end of his week of dinner-responsibility, and he fulfilled it admirably. I take over for this week. We'll see how it goes. 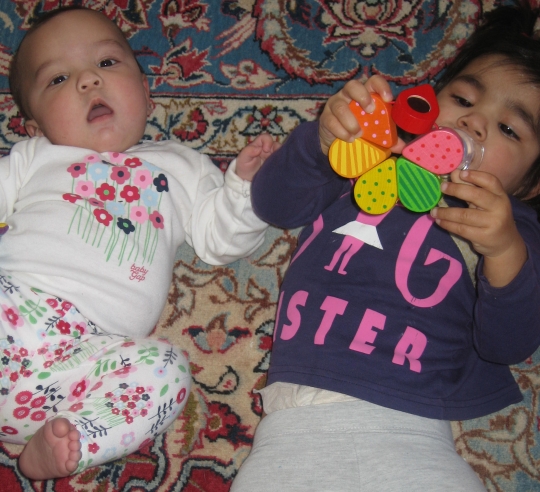 Had a really nice time with Venu and Nilofer; Nilofer brought both of her daughters, so it was baby-riffic around here. Zara is one-and-a-half, and Anushka is just a few months old, so with Kavi in the middle, we had a nice age range. I was really impressed by how Zara pretty much entertained herself the whole time, running around the apartment. Yes, you had to keep an eye out so she wouldn't pull the aquarium down on her head, ditto the curtains, ditto the wine rack (and no, our apartment isn't child-proofed yet, why do you ask?), but even so, she needed very little tending, aside from feeding her lunch. I am envious!

We even talked about a few non-baby things -- the election (Venu is pro-Abama, Nilofer and I are still waffling between him and Clinton); Walmart, ethics and economics and immigration. It's nice to know that I can still have those kinds of conversations with my friends who are both pre- and post-children. :-)

After they left, I ran out to do some small shopping errands, with mixed results. I returned some dish towels to C&B, no problem, and picked up some new mugs, because ours were getting seriously beaten down. Also some hand soup and lotion for the bathroom, which looks very nice there and hopefully will lead to cleaner, smoother hands. But my trip to the Container Store for two under-cabinet organizer thingies led only to false hope. Yes, I bought the two items in question, and brought them home, and I had measured the height/width/depth of the cabinets correctly -- but there is a serious amount of plumbing under the kitchen cabinet, and the items I wanted to install there will not fit. I pout in the Container Store's general direction.

It's barely possible that I can get a trash can tray that will fit, now that I know what measurements I really need, so I'll go look at it again. There's no way a stacked divided tray will fit on the other side, but a simple glider might still be worth considering. Ah well -- if organizing your life were easy, it would be less satisfying to get done, right?

No, that's total nonsense. I'd like it to be easy, please.