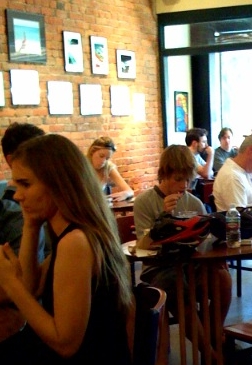 Wasted too much time futzing with iPhone today, having iPhoto issues, v. annoying in a mild sort of way. But did manage to finally start writing, hanging out in Los Gatos at Great Bear with Kevin and Jed while the grandparents babysit. (Kev and Jed pictured top right, discussing their iPhones. Geek-poly moment!) I'm working on the YA novel; I really sort of want to go back and revise earlier sections, but since I've sent those to a workshop that's meeting in a week, it seems best to leave them be, and just keep going forward with the drafting. So that's what I'm doing. One of my main characters just had full-blown hysterics. Fun. :-)

Finished the Bishop this morning; satisfying as a romance and well-written, but the series is not nearly as dark and twisted as it appears at first, which I admit, I find sort of disappointing, esp. in what's essentially a vampire story. Makes me want to go look for something more in the line of what I thought it was. Maybe it's time to re-read Butler's Kindred.

In other book news, I was delighted to hear that Tim Pratt has won a Hugo. Yay, Tim! I, of course, feel all proprietary and proud of him, since SH published him long, long ago (and ongoing). I admit to being a little mopey that Ben Rosenbaum didn't win a Hugo *too*, but his day will come, I'm quite sure.

And hey, speaking of books, my new copy of Chris Barzak's first novel, One for Sorrow has just arrived, and I'm looking forward to reading it. I just re-read his first SH story, "Plenty," which charmed me all over again. It's so nice, having friends who write well actually succeed in the random lottery that is the publishing world. :-)

Other interesting things that happened recently include a math party on Thursday night (where I met some of Kevin's grad students who referred to him as 'famous', nay, 'legendary' :-), and...hmm...I could've sworn there was something else interesting, but now I can't think what it would be, since Friday and Saturday I think I mostly just read and took care of baby. Odd. Oh well -- that's the weekend so far.