Facebook Instagram Youtube Twitter Patreon Shopping-bag
Menu
We went back to sleep in Los Gatos Saturday evening, crashing pretty hard. We were tired! I think we ate Kev's parents' leftovers for our dinner because we were just too exhausted to come up with anything else. Sunday morning started mellow enough, with bacon and eggs and toast and Sunday comics. But somehow that all took a little longer than we thought it would, and the last hour was spent rushing around, trying to pack up the car with everything we'd need for a week in Oakland. Kevin was patient with my testiness; we had lunch plans with Kira, and I hate being late.

We did eventually make it out the door, and up to the Oakland hills, where Kira's dad lives in a beautiful (huge) new house with lovely views of the Bay. Ah, if only I'd had money to buy property in Oakland ten years ago... 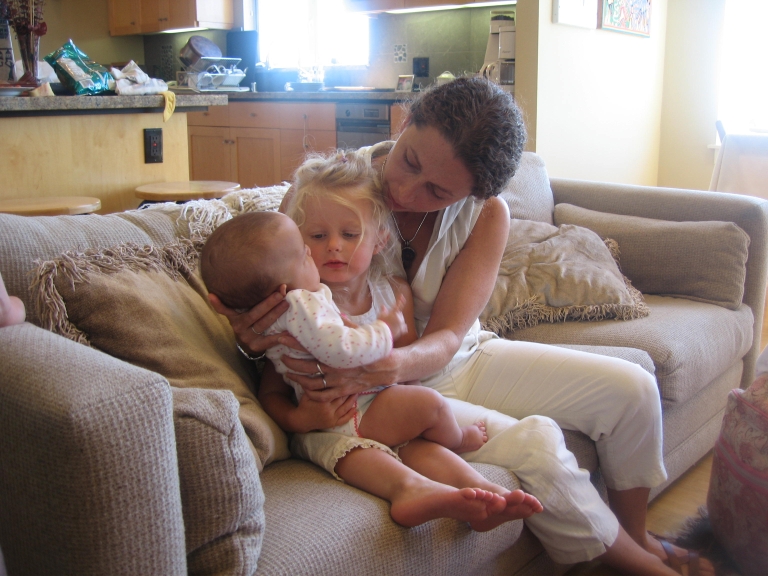 I was really glad to get a chance to introduce Kavi to Kira, since in years previous, Kira and I had had long conversations about whether or not we wanted to have kids, and when, and whether we could convince our boys to get behind the idea. Very satisfying, somehow, just being together with our daughters. Kira provided yummy lunch, and we were entertained by her two-year-old, Miriam, who has discovered the power of "no!"

(Miriam takes a few of her clothes out of her room and brings them to us in the living room, strewing them over the couch.)

Kira: Miriam, don't you want to put those clothes back in your room?
Miriam: No!

(Miram goes away, and comes back with more clothes, which are piled on the carpet in front of us.

Kira: Miriam, can you keep the clothes on the couch, please?
Miram: No!

(Miriam goes away, and comes back with all the rest of her clothes, which she then deliberately spreads out, item by item, to cover as much of the available carpet and floor space as possible.

Kira: Miriam, let's play with your clothes on this part of the carpet, okay?
Miriam: No!

By the end, we couldn't help laughing at poor Kira, who kept valiantly attempting to fight a rearguard action, in the face of obvious defeat. It wasn't her fault; she was crushed by overwhelming forces.

I shouldn't mock. In just a few short years, that'll be me...

2 thoughts on “We went back to sleep in…”