Facebook Instagram Youtube Twitter Patreon Shopping-bag
Menu
Sorry for the quiet; it's taken us a little while to get settled in Oakland. The construction work is almost done -- we have a bathroom again, and this evening the landlord's going to come by and clean up all the construction remnants. So, soon we'll be actually moved in.

Saturday, we brought some stuff up for the apartment, but mostly that day was dedicated to Tim and Heather's baby shower! Their little boy is due on Halloween, and I joined in with Heather's mom and sister to throw the shower. We did have enough food (though with only a few mushroom sandwiches (I made a double batch of those 'cause Heather particularly likes them) and some cake to spare).

It was lovely to see some old friends -- Jenn Reese was up from Southern Cal, and I got to meet her sweetie, Chris. Nice talking with Dan and Nadya, who are also expecting a munchkin; theirs is due in late November. I also had a bit more of a chance to chat with Lisa Goldstein and Lori Ann White and David Cleary, all of whom have kindly let me into their workshop while I'm out here. (I've been a fan of Lisa's writing for many years, so I find this particularly exciting.) And since it was a fairy tale-themed shower, I got to dress us up. Kevin condescended to wear my t-shirt of a knight saying "Ni." even though he doesn't actually like Monty Python -- he even wore a plastic rapier, because my boy is very indulgent of me. I had white and silver fairy wings and a glittery tiara. But the star of the show was Ms. Kavi, or perhaps I should call her by her proper title, "Kavya the Dragon." Or "Dragon Kavi"? Something like that 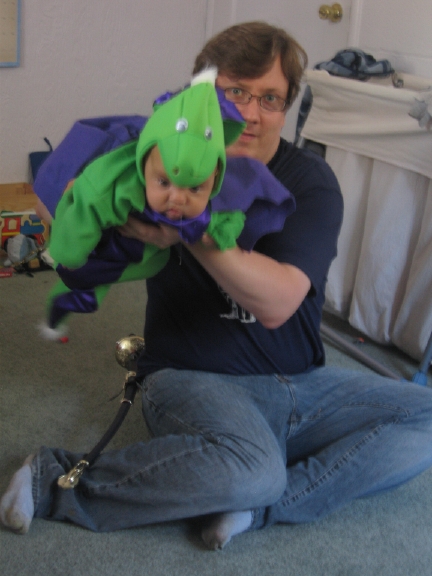 Look, she can fly! 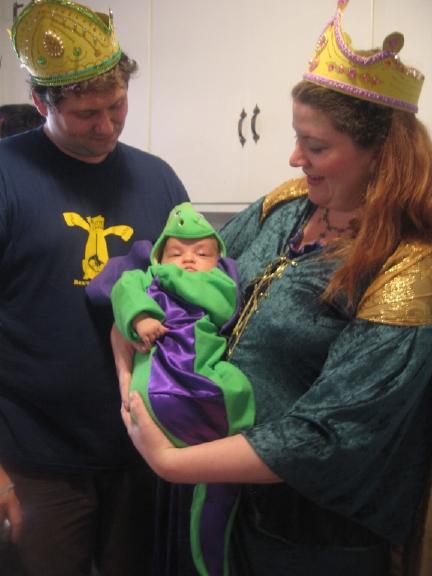 The king and queen practice for their forthcoming princeling...