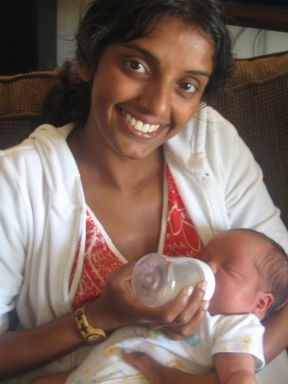 It's been very hectic here, but in a good way. A few notes: Despite being horribly weary, it was lovely seeing everyone, and we managed to sneak in a game of Settlers of Cataan, in between pumping and cooking and snuggling baby and such. And last night, Kevin and I went out and rented a high-quality double-pump, which should cut my pumping time in half. We're still hoping that she'll take to the breast sometime soon, but in the interim, this will make pumping less tedious.

That's what's happening around here. Did I mention that we are very tired?