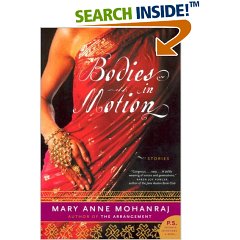 Apologies if I've posted this before, but I don't think I have -- the trade paperback cover of Bodies in Motion. Very similar to the hardcover, but slight change in font, warmer tones throughout. I like it fine. Sorry I don't have a cleaner image -- I grabbed this one from Amazon, obviously.

I spent a bit of time on Amazon this morning, posting to their new Author Blog function and poking around. Was disheartened by some of the thoroughly nasty comments on BiM. I mean, it's fine if people don't like my book -- there's plenty of books I don't like. But some of this stuff just seems so mean-spirited, as if they're out to slam me personally. I know, I know, I shouldn't take it that way. But still. When they reference 'over-educated mfas/phd's', you have to think they're talking specifically about me. I wish I understood what motivated people to be this obnoxious.

Formulaic, pseudo-Asian schlock, February 12, 2006
Reviewer: Jennifer M-R (Duluth, MN USA) - See all my reviews
Ever since the Iraq War, American readers have had an insatiable appetite for all the pseudo-Asian schlock we can stuff into our ethnocentric pieholes. Publishers filled (or, arguably, created) this need, starting with Khaled Hosseini's, The Kite Runner and continuing in an endless syrupy stream, of which Bodies in Motion is merely one example that I was unfortunate enough to run across. The formulas usually involve veiled women (with independent minds and churning sexuality), brooding men (who are bothered by Westernization but rarely think political thoughts), a humanizing plot device to help us empathize (similar to anthropomorphizing monkeys at the zoo), and an author (no matter how American) whose name sounds Arab enough to lend credibility. Bodies in Motion has the token twist: They're Sri Lankan lesbians.

Dull and not of interest to the average reader, August 9, 2005
Reviewer: Janessa KR - See all my reviews
This book would be a fine example of what's wrong with so much fiction written by over-educated mfas/phd's -- pleasant writing style, with basically nothing new to say. No moral outlook, nothing that should be required of a novel. To be fair, it's hardly the only novel around like this that gets good press somehow. But when this one gets compared to Ondatje, it's a choking point. Buyer beware, a quick five minute breeze-through in a bookstore cover the content nicely, and is more than enough.

The following two reviews are also negative, but not as harsh-sounding. I can't really complain about them as reviews. Still, I do find it confusing -- my book has a mix of primarily 4-5-star and 1-star reviews. If I really thought a book was only worth 1-star, I can't imagine that I'd bother writing a review of it...

Style over substance, November 24, 2005
Reviewer: Jalia Torres - See all my reviews
I was very disappointed by this book. It promises poetic writing and great sensuality, and both items seemed to be missing in my copy! "Pretty" writing at some points, but no depth, which seems a requirement in order to be truly poetic. There wasn't a character I'd care to follow to the end of the page, never mind to the end of a book full of mish-mashed stories. There's probaly a good and interesting tale about Sri Lanka/immigration in here somewhere to be told, but it seems that the author doesn't have the skill to bring that story out and make it hold the reader's interest.

dull and repetitive, July 25, 2005
Reviewer: RR (LA) - See all my reviews
I read a favorable review of this in my paper, but really, they must have read some other book! I couldn't follow the characters - and didn't really want to after a while - and couldn't finish the book. It's like a rehash of everything you've ever heard or read about arranged marriages, unhappy women, demanding males, etc, without any spark or originality.

I suppose I should take some consolation in the fact that none of these people were willing to use their real names.

At least many of my friends who have read it do seem to like the book -- though perhaps they're just keeping quiet if they didn't. But I could wish that more of the readers who liked it would post Amazon reviews, just to get the nastier ones to scroll off the main page so I don't have to see them when I stop by. :-(

Maybe I go read the lovely Boston Globe and SF Chronicle reviews for comfort. Gods bless Renee Graham and Kim Hedges. Who use their real names.

6 thoughts on “Apologies if I’ve…”