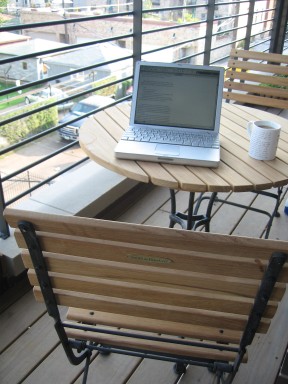 Someone asked me at the wedding if I liked my new place, which I do, very much, though that's gotten lost a bit in all the craziness. And they asked if I'd put photos up, and I had to admit that I'd managed very few. So here's one of my balcony, where I was working this morning finishing up revisions to Part I of The Arrangement. I tried, but failed, to get a shot that included the plants, but rest assured, there are pretty flowers right next to the little table. Just couldn't get the right angle on the shot, because the balcony is quite narrow.

Bob's a bit concerned about my making my end of the month deadline, probably because I've taken several months to revise Part I and, y'know, there's still four more Parts to go in what remains of October. I feel oddly confident that there's actually time to finish it, though I'm not sure I could tell you why.

It depends a lot on whether Part I is actually as solid as I think it is; if it's just matter of revising the rest to match, then as long as I write every morning for a month, I should finish on time. If it's not -- well, then we'll just have to see what happens.

Kevin likes the new revisions quite a bit, which is reassuring. We'll see what others think. I've just sent it out for comments. I forgot to ask the readers to tell me what they like about it. At this point, I could maybe use reassurance more than criticism, to keep me going.