Facebook Instagram Youtube Twitter Patreon Shopping-bag
Menu
Dinner two nights ago was at the Old Empire Hotel, highly recommended in the Bradt guide as being authentic. I'd say that it is authentic, being much like the food my family makes, but not a particularly good example of authentic food -- ours is notably tastier. Cheap eats, at 50-200 rupees for a meal, and an acceptable alternative, but not worth going out of your way for. Afterwards we came back to Stonehouse Lodge and collapsed, grateful for the fan that cooled the room to a perfect sleeping temperature (for me -- Karina was still a bit warm). I slept like a baby for a change. Very much needed at that stage.

Yesterday was a full day, perhaps overly full. We had engaged a driver, Sannath, to take us around, which proved a wise choice -- he took excellent care of us. We started around 10, with a stop at a spice garden, where we learned much about spices. 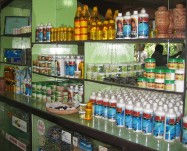 Afterwards, we headed to Pinnawella Elephant Orphanage, where we engaged in an excess of elephants (if there can be such a thing). Only 500 rupees to get in and watch the elephants from as close up as you care to go, to see them fed from huge milk bottles, and you can also have the mahouts hold them still so you can pet them (for which the mahouts expect a 50-100 rupee tip). I love elephants, and Karina may love them even more. Very satisfying. 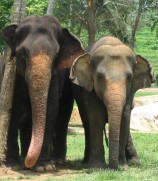 Sannath led us to a cafe across the way for lunch, from which we could watch the 2:00 bathe of the elephants in the river. I had a most excellent devilled prawn 'snack' -- which, served with rice, was actually a large meal (320 rupees, which Sannath considered quite pricey). Karina had fruit salad and nuts, yummy but overloaded with papaya, of which she is not fond. Next time, she'll ask them to hold the papaya!

Sadly, our cameras ran out of batteries around now, and we had forgotten to bring the spares, so no more photos for the rest of the day. But it did let us concentrate a bit more on the experiences... Next, the Millenium Elephant Foundation, where five retired elephants live. For 1500 rupees, you can take a 15 minute elephant ride; my bones are still a bit sore, but it was exciting. I admit to indulging some fantasies as we went, of me as great king, triumphantly proceeding on my elephant. The grinning villagers who occasionally waved at us helped the fantasy along. :-) They also let us use a coconut shell to scrub Rani, the elephant we rode, in a shallow bit of the river, for a small tip. She seemed to like it, though it was a bit hard to tell.

Then a brief hour-long stop at the Perideniya Botanical Gardens which are just stunning. Incredibly serene, with massive trees reaching up to the sky and a sense that you could easily get lost in it for a day. I recommend taking quite a bit more time there than we did -- bring a book and a picnic lunch, and relax. There's an orchid house, a flower garden, a Japanese garden, a ferny nook, an avenue of palms, and a confusing suspended bridge -- confusing because it appeared to be closed for renovation, but we talked to a tourist later who said that they'd opened it for his tour group and he had walked halfway across. If you can, do -- I did the last time I came, nine years ago, and it was marvellously rickety and a long way down. We also saw in one section quite a massive number of fruitbats hanging from the trees high overhead. I have this vague memory of monkeys in the gardens too, but we didn't see any this trip.

Our driver dropped us in Kandy, and we went to one of the cultural centers for a display of Kandyan dancing. Ten or so dances, some more impressive than others. My sister does a better snake dance than those girls did. But the spinning plates were fabulous, and the bits with the acrobatic backflips, and the conclusion of fire-eating and fire-walking was incredibly impressive. I've never seen such a thing before, and I almost don't want to know how they do it. It was magical.

Afterwards, oh, so tired. I was crashing, and we barely managed to find the restaurant we wanted to eat at, Rams, recommended in Lonely Planet. It had moved, and there was another restaurant, Ram, where it used to be -- sneaky!!! But we found the one we wanted, a street away, and Karina went into transports of ecstasy at the plethora of vegetarian options available there. I was quite pleased to see uppuma chicken myself -- not exciting, perhaps, since it's something I make at home, but comfort food and appreciated in the circumstances. I'm having an odd reaction to the food -- I like it, but it's hard to be impressed by it, since it's just like what my family makes, and my family generally makes it better. Strange. Like I'm travelling to a foreign country -- but not really. Perhaps characteristic of this entire trip.

And then we came home to the Lodge and collapsed again, falling asleep quickly. We slept in this morning, and had a late breakfast, and spent a while editing photos, and it's past 1 now, and we really should head into town. Karina wants to have lunch at Rams again, so we're headed there, then e-mail at KoffeePot, then walking around, shopping, visiting the Temple of the Tooth.

2 thoughts on “Dinner two nights ago…”