Facebook Instagram Youtube Twitter Patreon Shopping-bag
Menu
Last night was a bad night. We had tried to buy a train ticket to Kandy yesterday, but we got to the express train ticket window at 4:05, and it closed at 4:00 (which we didn't know). V. frustrating. So the driver advised me to come back this morning early and try to buy a ticket for the late afternoon train (they only run twice a day from Colombo to Kandy, at 7:00 and 3:25, about a three-hour ride). So last night, I knew I had to get up early; I had asked for a 7:30 wake-up call. And I couldn't sleep. I don't know if I would go so far as to call it a panic attack, but definitely feeling some serious anxiety, enough to raise my pulse rate and keep me agitated. Karina luckily is a night owl and distracted me as best she could with chatting, and with the help of some dramamine I finally managed to fall asleep around 4 a.m., I think.

Then this morning, I successfully woke up and made it to the train station and bought my ticket for the first-class observation car (200 rupees each). I felt triumphant, and perhaps that made me over-confident as I set off to find a power converter so I could recharge my computer and camera batteries. I was walking along, smiling, enjoying the not yet oppressive warmth of the early morning. And a nice man came up to me, and started chatting, and in the spirit of the morning, I chatted back. He told me that I was walking the wrong way -- that I was in the bank/embassy area, and there were no electronic shops around, and that I needed to go back to the Pettah area (near the train station), and that it was too far to walk. It is not too far to walk, though I admit, it would have been a long walk. People don't seem to walk much here, or maybe they just don't expect tourists to. Because by the end of our acquaintance, it had become clear that he had pegged me right off as a tourist.

"Ah, madam, you must come see the festival. There is a very special festival today at the temple. You are lucky to have met me. Please, get in the tuk-tuk [auto-rickshaw]. I will come show you, yes?"

And cheerfully, I said yes, failing to either negotiate his price as a guide in advance, or the tuk-tuk driver's price. Because I am a dork who blithely ignores the advice of every single guidebook I've ever read, but most especially the three guidebooks that I brought to Sri Lanka. He did take me to a gorgeous Buddhist temple, just stunning, and then to see the elephant in the park nearby, used in ceremonial processions. 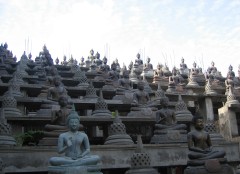 We stopped at a Hindu temple too for exterior photos, but they wanted 500 rupees to let me take photos of the interior, so we passed on that.

And then he tried to convince me that I wanted to see the Buddhist temple gem mine store, only a $50 or $100 donation required towards tsunami relief. This is where I stopped feeling cheerful and friendly and I finally realized that I'd better negotiate some prices, fast.

So the tuk-tuk driver wanted 3600 rupees -- a normal 5-10 min. ride cost 100-150 rupees, so you can see that even an hour shouldn't come to anything near 3600. We'd been puttering around for close to an hour by the time we finished (I did eventually buy a converter too), and I offered him 2000, and he said 2500, and I said fine. And then the guide asked for a small tip, only 1000 rupees. And I only had large bills (1000 rupees) and tiny ones (20 rupees), so I couldn't give him the 250-300 I felt he actually deserved. So, ah well, I paid him his 1000, and tried to feel amused at his style -- he did a good job with it, really sucked me in, and was quite charming and informative while he was taking me. If I had negotiated such a guided tour price with the hotel, I would have gotten 2-3 times the time for half the price -- and maybe another person would have kicked up a bigger fuss, refused to pay at all. That's not my style, though. I suppose I should just consider it a lesson learned, and part of the price of travelling to a strange place. They see you coming. They're waiting for you...

Afterwards, I woke Karina and we had a nice brunch; mutton curry and fish curry and milk rice and parathas, pineapple juice, jaggery and a bun with woodapple jam. Tea. Went back to the room and rested for a bit, then put on our suits and went for a swim. I love my new swimsuit (or bathers, as K would say) and sarong -- they are so very very cheerful and tropical. Swam for a good while, and then discovered as we were leaving the pool area, steps down to a tiny little private beach. So we waded out into the ocean, and got knocked down by the waves a few times, and swallowed a bit of seawater, and generally had a marvellous time. It felt amazingly therapeutic, being pounded by the waves, out there under the bright sun. I could have stayed there for hours.

But we had to shower off a pound of sand, pack up and check out. We went to the Hilton Hotel where Karina had a yummy buffet lunch -- garlic curry, cabbage mallung, mixed veg curry, dal, and a plethora of desserts. Most notable was something that claimed to be a cheese souffle that tasted like a tangy meringue/tart. I didn't eat, because I was still stuffed from brunch, but I had some watermelon juice and tea, and then picked up a few things for the train from a stand in the lobby -- a fish bun for me, and a few samosas and some chocolates.

They're about to kick us out of the cafe, so I will only note that while the scenery was spectacular, our observation car was not air-conditioned as we'd expected (and thought we'd been promised). It did have fans, but it was still drippingly hot for most of the trip -- we drank about four water bottles in three hours. We climbed up through lush hills, and Karina tried to take many photos, but the train was going so fast and hurling about so much from side to side, that it's possible that none of them will come out. 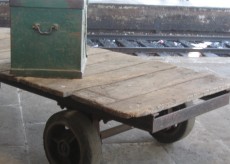 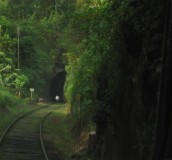 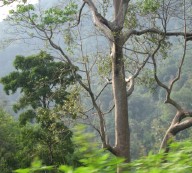 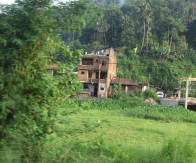 I very much enjoyed my fish bun -- it tasted just like I remembered, mackerel and potato and onion and chili in a dry curry, perfect train food.

No internet at Stonehouse Lodge, where we're staying -- also no bathtub or air-conditioning. But it's lovely and cool already this evening, and we can manage with showers, and there's an internet cafe called Koffeepot in the center of Kandy, charging only 3 rupees/minute (as opposed to 10/minute at Galle Face Hotel). The exchange rate is roughly 100 rupees/1 dollar right now, just to give you a sense of proportion. 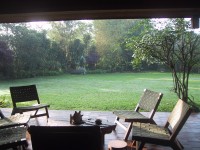 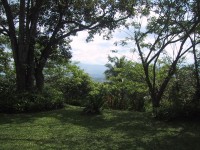 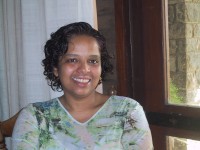 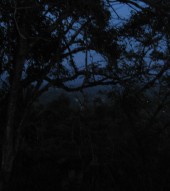 Still no telnet here, sadly, so can't access my normal e-mail. Tomorrow we'll be out all day seeing elephants and botanical gardens, but the day after, I plan to be online for a few hours. Talk to you soon...