Facebook Instagram Youtube Twitter Patreon Shopping-bag
Menu
Hmm....it's not so easy, starting to work again after a week away. I did a tiny bit of work on the train going up to New York on Monday, but basically this last week, nada. Lots of cooking, lots of lying around in front of the tv (in fairness, I was still pretty sick with that cold for the first half of the week -- weak and feverish and wobbly). Lots of hanging out with the family, quite a bit of snuggling with Kevin on my parents' couch (slightly surreal, but pleasant). A short walk in the woods with Kev and my cousin Shalini (who took many of the photos posted yesterday), followed by some pseudo-basketball on the half-court in the backyard. A half hour of that and I was sufficiently tired to go lie on the couch some more. A little computer game playing -- Neverwinter Nights this time. And of course, amazing amounts of eating. My mom's curries on Wednesday night with about half the family, then everyone showed up on Thursday for the standard Thanksgiving spread, followed by one of the aunts cooking hoppers that evening, eaten with more curry, not because there wasn't enough leftover turkey, but because my family doesn't really believe that they've eaten that day unless they had some curry. 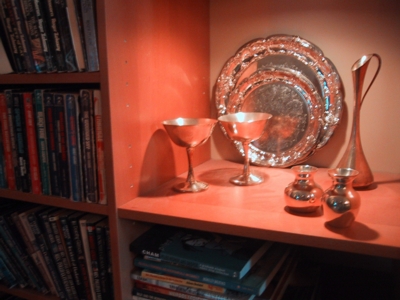 The point being, it was pure vacation, and now I'm back with more work than I know what to do with, and it's all feeling rather unmanageable. So instead, I've turned on the cooking channel, and just spent an hour cleaning the tv room (putting things away in cupboards (I love cupboards), changing the guest bed back into a couch, sweeping, swiffering -- I polished the silver last night, which is what I find myself doing when I just can't cope with anything else. Bizarre. I have these random silver-plated pieces that I picked up in various flea markets and such, and even though most of them have worn spots and so on, I'm unreasonably fond of them. My mom gave me two more on this trip, old plates that she had in the attic. So now I have two serving plates, two wine cups, one flask, and two little vases. Pretty!). This room feels sane again, like a space I can work in. The kitchen is next, though, and that's kind of scary. I may actually just stay in here and try to burn through some of the backlogged e-mail for the next few hours.

Once the place is clean, then I can think about decorating -- because now that Thanksgiving is over, I get to haul out my Christmas stuff. Yay! I'm trying to be restrained on actually purchasing new Christmas decorations; I have a respectable supply already, after all. I do think I'm going to indulge in one lovely item, though -- a hydrangea and eucalyptus wreath for the front door. A little pricey, but Williams-Sonoma claims it will last for several years, and I do love real wreaths. Last year we just had a jingle-bell wreath, and while it was cute, it just wasn't the same, somehow. If this does last five years or so, then it's only $10 for this year. That's not so bad. :-) The hardest part was deciding which wreath to get -- I also liked their crab apple wreath, their herb wreath, and their rose wreath. Life is full of hard choices.

Hey, I can start singing Christmas carols now too. Maybe I'll actually go learn a new one this time around, something old and lovely, like "Bring a torch, Jeanette, Isabella". I learned "The Holly and the Ivy" a few years back, and it's possibly my favorite carol -- though "Good King Wenceslas" is a strong contender for the title. They both have such interesting lyrics and lilting tunes...

Good King Wenceslas looked out, on the feast of Stephen,
when the snow lay roundabout, deep and crisp and even.
Brightly shone the moon that night, though the frost was cruel,
when a poor man came in sight, gathering winter fuel.

Oh the rising of the sun,
and the running of the deer
the playing of the merry organ
sweet singing in the choir.

If I remember right, 'choir' used to actually be pronounced such that it did rhyme with 'deer' -- I can't quite bring myself to sing it that way, though. And to be honest, I rather like the almost-rhyme (slant-rhyme?).

What's your favorite carol or Christmas song? Do you wander around your house singing it? :-)