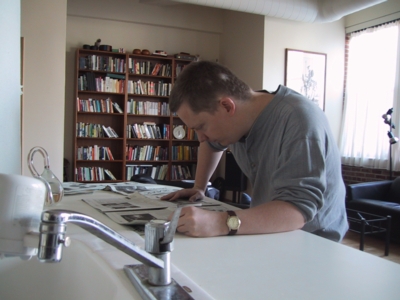 Yesterday was a nice lunch at Artopolis with Kevin's dad and spending a while looking at newspaper listings (see right) trying to decide what film we wanted to see, and then going out to see Possession (not a bad adaptation, I suppose, but so thin compared to the novel -- not sure how they could've done better, though, given the limitations) before driving him to the airport. In the evening, we both watched some tv and then collapsed around 9ish, so tired. We're still sick, clearly. Sigh.

Today was e-mail in the morning and watching the recorded West Wing so now I'm caught up and next I'll go hide in the bedroom and try to finish the half of the CYO that's due tomorrow. Around 5-ish, come out and make dinner. Kam's expected around dinnertime, which will be very nice. I won't be surprised if we collapse early again tonight, though, in which case she'll have to entertain herself...