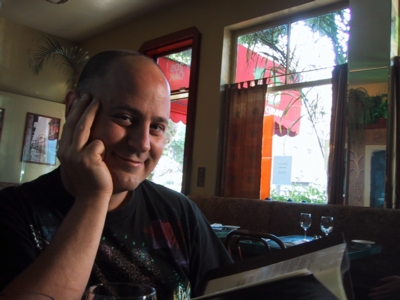 I'm finally starting to edit my trip photos. That's Clive. A few days after WorldCon, we managed to hook up for dinner in San Francisco -- I was especially pleased, since Clive lives in the U.K., and I hardly ever see him. I don't know if I've ever told y'all about him before, and it's a good story, one from my very early days on the net. So here goes.

When I first got online, I basically spent my time in newsgroups. (If you're not familiar with newsgroups, they're umm...sort of like electronic bulletin boards, divided by subject category, in various subject heirarchies. Some of them are more organized and on-topic than others. They're still around, but there are enough more people on the ones I like that they no longer provide the kind of community I enjoyed in them back then, so I don't visit anymore. Also for lack of a decent newsreader -- I haven't really liked anything I've tried since trn, and I don't have access to trn anymore.) I used to read rec.arts.books, rec.arts.erotica, soc.bi, alt.sex.stories, a couple others here and there. And alt.callahans.

Alt.callahans was a discussion board based on a concept found in Spider Robinson's novels about Callahan's Crosstime Saloon -- basically a bar that anyone could wander into and be welcome in. Anyone at all -- including time travellers, aliens, talking dogs, telepaths, etc. It felt very...net.like, back then. We'd all wander in, some of us just as us, some in some persona or other. You could just post your opinions, or you could write it up as a little story or other:

Kateri wanders in, having been away for a while. She gets a hot chocolate from Mike at the bar, drains it, and then walks up to the fireplace to propose a toast.

That kind of thing. It was friendly-like, and while there were quite a few people reading it (maybe as many as a couple thousand back then?), there were less than a hundred regular posters. With Lamplighter keeping track of people's birthdays, it felt very intimate, very cosy. I felt like I really knew these people.

Occasionally, there were bad times, of course. There was a bit where it turned out that someone who'd come in with a sad story of cancer and poverty and such wasn't actually sick or poor -- they'd just been making it all up. That pissed people off, because they'd gotten involved, y'know. They cared. That kind of thing is still happening on-line, in little communities all over. I imagine it'll keep happening.

Mostly, though, it was really good. A haven. I wasn't me there -- or not just me. I went by Kateri (one of my middle names), and I had a definite persona, one a little more outgoing than my real personality. (I used to be kinda shy, up through the first year or two of college. I grew into the outspoken terror you know and love today -- and maybe Kateri was a bit of practice for the kind of person I wanted to be.)

I'm muddled about the chronology of all this. I've been telling people for years that Paul got me on the net, reading newsgroups and such. It's definitely true that he made me get my own e-mail account. But maybe I was reading news online before that? Because I didn't date Paul 'til the end of my sophomore year -- he was my second boyfriend. And I'm pretty sure that it was Christmas of my sophomore year that Lisette and I went to England for ten days. She was upset about some boy and I was too -- and I think that boy was still Dean, who had broken up with me almost a year previously. (I take a long time to get over being dumped.) That all makes sense individually, but the chronology gets confused when I try to put it all together, because I had to have been reading alt.callahans long enough to be comfortable with the people there -- comfortable enough that when Mary and Simon, two of the regulars there, invited me to visit them in Bath, I agreed. Lisette came too.

Putting chronology aside -- oh wait, one side note. Jed recently mentioned that he'd been on alt.callahans too...probably a while before me. He must have left before I joined up. We could've known each other ten years ago! I could've had an extra five years of Jed! Unfair, that's what I call it. The universe is cruel. But now back to our story...

Putting chronology aside, I did go to England that Christmas. I rode the airplane with Lisette -- the airplane ride that inspired the first short story I ever wrote, "American Airlines Cockpit". (I'm not linking to it because it's embarrassingly bad.) We spent some days in London with friends of her family, sleeping in late, sight-seeing in the afternoon, eating pub food for dinner and then going out to half-price plays. We saw a lot of plays in ten days. I talked her into going to Bath with me; I think I was a little nervous about going alone to stay with people I'd only met online. After a rather damp train ride, we arrived at the house that Mary shared with her housemate, Clive. I don't think her sweetie, Simon, was living with her at that point. (Incidentally, Mary and Simon were at WorldCon, and it was lovely seeing them, and they seemed exactly the same as they did ten years ago. Exactly. It's very nice when some people don't change. Some people ought to change, of course. But some people shouldn't. They're just right as they are.)

We were cold and damp -- I don't know about Lisette, but I still hadn't adjusted to the lack of central heating in many English homes. (Although it was nice tucking oneself into an electric blanket.) They got a fire going in the front room, and plied us with hot drinks and good conversation. That was a really pleasant evening -- which got more pleasant when Clive volunteered to give me a backrub. Mmmm...sitting in front of the fire with some strange (but seemingly very nice) man giving me an excellent backrub did a lot to relieve travel stress. I think I'd also gotten sort of touch-starved; Lisette's one of my best friends and I love her dearly, but she's very not-touchy. I think I'd gone five days at that point without doing more than shaking hands with anyone. It was getting to me.

Anyway, one thing led to another, and Clive ended up spending the night in my guest room. It's funny -- I normally don't really discuss my sex life in this journal, and I admit to having been a little hesitant about writing that last line. But it's part of the story, and it was a long time ago, and I should just get over it, dangit. So there. I don't think Clive's gonna mind.

He wasn't like any of the guys I knew at Chicago. A little older, a little more idiosyncratic. He wore brightly-colored patterned pants. He played digeridu. He told folk tales that he made up himself. He was very relaxed, and not particularly invested in how smart he was (though he was actually smart). I had a good night, and in the morning, I kissed him goodbye and we went back to London. Lisette was a little shocked by the whole thing.

He's partnered now, and apparently living in the wilds of nowhere in Scotland. I'd like to go visit him and his girlfriend. They have a big house, which just barely has electricity (the next house, a ways up the road, doesn't). Dogs and horses. A massive forest. Lots of cold, grey days. He's thriving on it, and writing more folktales, selling them to children's magazines. He's given up the computer stuff he used to make a fair bit of money doing; he's not sure if he can make a living with the writing, or if they'll stay in that big old house, but for right now -- for right now, he seems very content.

Every time I see Clive, I'm reminded of how different life could be, and is, in another country not so far away. It's a good reminder. It makes me slow down a little, and breathe, and think about cold nights on the heath, houses without central heat, electric blankets and warm bodies tucked into them. About the person I used to be, ten years ago, and the person I'm turning myself into now. It's good, to stay in touch with your past. Especially when your past is people.