Facebook Instagram Youtube Twitter Patreon Shopping-bag
Menu
Jeez, I lost track of days entirely. Not sure how, but I had no idea today was Monday, or June 3rd. Which wouldn't matter, except there was a whole bunch of SH stuff I was supposed to do before this...ideally, well before this. Dammit. Playing frantic catch-up today; just finished the art gallery, and now I have to write an editorial. Then there's a fund drive to get started...

What I *have* been doing the last few days is hauling my butt to IKEA and then hauling many large boxes back here. Kevin and I spent the last two days just immersed in bookshelves; carrying boxes, opening boxes, assembling shelves and drawers and cupboard doors and little lights. We managed to get them mostly finished by yesterday morning, by staying up 'til 4:30 Saturday night. I don't know *why* I was so compulsive about it; it's true that we had various guests coming Sunday, but really, none of them would have cared. Somehow once we started, it was really hard not to just keep going. Despite utter exhaustion. We ran out to Home Depot around midnight for brackets -- that's just sad, is what I think. (On the plus side, we also picked up a beautiful potted orchid there, on a whim. Who knew Home Depot had orchids? How weird...) 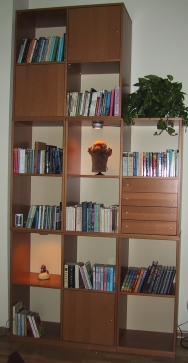 Still have some finishing to do on the big genre bookshelf (sf/f, mythology, poetry, mystery), but we did manage to finish the kids' fiction one. Lots of space to grow on that one; each of those shelves can be fitted with a divider, so I can buy at least twice that much before I outgrow that bookshelf. So satisfying, I can't tell you!

Yesterday I woke up after about two hours of sleep -- don't know why! Frustrating, but what can you do? So I got up, did some more work on the shelves, and did a lot of clean-up. Tons of empty boxes to haul down, etc. Around 10, I woke up Kevin and made him help; we had company due around 11. Sherman was in town for his ten-year college reunion (mine's next year, eep!), and he and Shauna came to brunch. When they arrived, they announced that they'd just gotten engaged on Friday -- yay!!! Sherman's (finally) getting married. I've never known a man who wanted to be married so badly, and I'm just delighted for him...for both of them, in fact. They look really happy together. It's so nice.

Also at brunch were Daniel (another old friend from college, whom it was *very* nice to see again), Roshani, Tom and Zoe. Zoe was delightful and oh so cute. At one point she wandered into our bedroom, tried to climb up on the bed (didn't make it), and then spotted my rocking chair, where my two stuffed bears (Bear and Teddy -- good names, huh?) live. Kev was watching her at that point, and says she just raced over there and climbed up. When I came in, she was clutching them both tight, with a huge grin plastered across her face. Kev says I missed the bit where she was rocking and saying "hug hug hug" over and over. :-) The bit I saw was still pretty damn cute, though.

Roshani brought all sorts of things to add to our brunch. I'd made a vegetable frittata and strawberry-rhubarb crepes. I'd also put out some toasted pita, taramosalata from the local Greek grocery, and some Bulgarian feta (it's creamier than Greek, more spreadable). Oh, and sliced pear and fresh strawberries. Roshani brought green grapes, tasty hummus, some danishes and two massive loaves of bread -- we only made it through half of one of those. She also brought me a huge pothos plant (one of those big-leaved green things you see in offices and which are just impossible to kill, see picture above). It's so nice having plants here; it feels much more like a place to live now, somehow.

Great food, and just a really nice time all around, hanging out with friends and chatting. Sherman and Shauna had to leave around 2 to catch their plane; the rest of us hung out another hour, and then Kevin drove Roshani and me and Zoe down to Hyde Park so we could walk through the 57th Street Art Fair. (Tom walked over to the Printer's Row book fair instead.) Kev went to the Seminary Co-op bookstore while we put Zoe in the stroller and walked through the fair. Many wonderful things, giving me all sorts of ideas. All way out of my price range; the cheapest things that appealed to me started at $90 and went up up up. Oh well.

A quick stop at 57th Street Books to pick up some kids' lit. (Nesbit and Jones, oh yes) -- have to fill up that bookshelf after all. 20% off for this weekend; it's the big art/book sale in Chicago. By the time we finished there (5ish?) I was just dead on my feet; ready to fall over with exhaustion. Grabbed a quick slice of cheesecake at the U Chicago C-Shop, somehow made it back home, Roshani and co. went home, and I'm honestly not sure what I did for the rest of the evening. Watched dumb tv and oh, right, put together those drawers pictured above. Big pain. Kevin had to take over for me at the end, 'cause I was just too tired. I went to sleep around 11, I think, just before Kevin's colleague David arrived -- he'll be staying with us for a few days, so they can talk math.

I slept until 10 this morning. So tired. I'm still a little tired now -- I must have used just tons of muscles I don't normally use, putting those shelves together. I have to admit, though, it's pretty satisfying, looking at them now. I built that. Well, we did, and only sort of, since it was all pre-cut and pre-drilled and such. But still.

Breakfast of sliced mango and grapes and danish and tea (for me) and espresso (for them) and lots of math-talk (also for them). Very cute. That was when I discovered (while checking e-mail) that today is the 3rd, and I'm so behind on SH stuff and now I really ought to run and deal with the rest of it. But I wanted to record this weekend before I forgot; it was pretty jam-packed. Hope you all had a more restful time!