Facebook Instagram Youtube Twitter Patreon Shopping-bag
Menu
I'm taking pity on y'all -- instead of deluging you with photos, I'll just point you to the separate pages for them. How's that? It's taking me a while to do the pages for them, anyway -- I did the three non-books, but the books may have to wait 'til tomorrow or another day.

Dreams of a Lover was a really fun, if random project. It's not like anything else I've done, and I doubt I'll do anything like it again. I picked up a cardboard book form at a craft shop, then covered it in handmade paper (very precise and somewhat tedious gluing!). Once that was done and dried, I added a drift of dried rose petals to the inside (huzzah for craft glue), and some rosemary. Then came the tricky bit -- cutting and gluing strips of thin handmade paper to make an accordion-fold book, then writing out my poem on it, both sides. Once I had the book, I sewed embroidery thread along one side. The whole assemblage was glued into the cardboard box, and then I sewed two antique buttons to the box as well (one inside, one outside). The thread wraps around the inside button, securing the poem (barely) closed. You unwrap it to read the poem.

The whole project was much more work than I expected, and also more confusing. But it was interesting to do, and fun trying to figure out how to make the book stay closed! This is definitely a one of a kind item, though -- too much trouble to do again.

and we go spinning was much more straightforward. Once I'd found the cool ferris wheel frame, it was just a matter of writing a poem that worked inside it, starting at any point, going backwards and forward. You saw a draft of that poem earlier; the final version is somewhat better. This kind of restriction doesn't make for great poetry, I'm afraid, but I do think it has a certain lovelorn something. Then it was just a matter of printing it out, tearing and oiling the paper (to make it translucent), drying and gluing it in, along with dried flowers. I layered the second piece of glass over each one, then inserted them into the frame. Easy and fun! The whole assemblage (aside from poem-writing) took maybe half an hour, and I'd feel guilty charging as much as I am for it, but I need to make back the cost of the frame as well. Fun, and I like the clean lines of it. 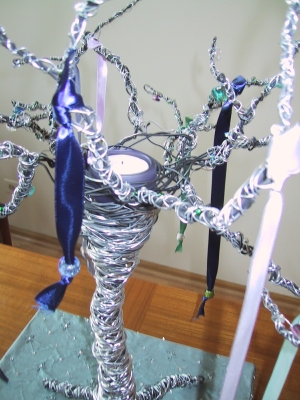 Tree of Fire and Rain -- I had to give you one detail picture here, just 'cause I love this one so much. To see the entire tree, follow the link. This tree took forever to build; it's entirely structurally based on wire, which gives it a great swayingness, but ate up many hours (luckily in front of the tv :-). If I ever do anything like this again, I think I'll start with a more solid metal core -- it won't be as cool and swaying, but it'll be a lot easier! It was fun building the branches, though I got a bit tired towards the end; if I have a chance, I may get just a little more silver wire and add one more layer of wrapping. I did enjoy adding the beads (many many tiny beads wove along the branches, medium size beads at the tip of each branch, like bright fruit), and ribbons hung with large shining beads -- I wanted the whole thing to sparkle and shimmer, and under a bright light, it does! I also bought a (quite expensive) piece of embroidered sari fabric, and used that to construct a base for the tree; I like the way it looks like slightly faerie grass. I can imagine a place in the elven lands where just this sort of tree might grow on just this sort of ground. (I'm a big geek, clearly. :-)

The piece was inspired by an Ursula Pflug story, actually, "Sewing Forgetfulness". We ran it at Clean Sheets some time back -- in the story, at one point, someone looks out onto an apartment airduct (you know the kind of open space in between several apartment buildings?) where a tree is growing, and finds that in the middle of the night, someone has decorated the tree with hundreds of ribbons. I loved that image, and that was what I wanted to evoke here.

I also really like the little candleholder nestled in it; I think this would be really pretty as the centerpiece for a large dining table, perhaps with linens in dark purples, and cobalt plates. I love this color scheme, but if I do it again, I think I'll try copper wire and warm colors. Might make it slightly smaller too -- this took so much time, and the wire made all kinds of tiny cuts on my hands. Ah well -- one must suffer for one's art, right? :-)