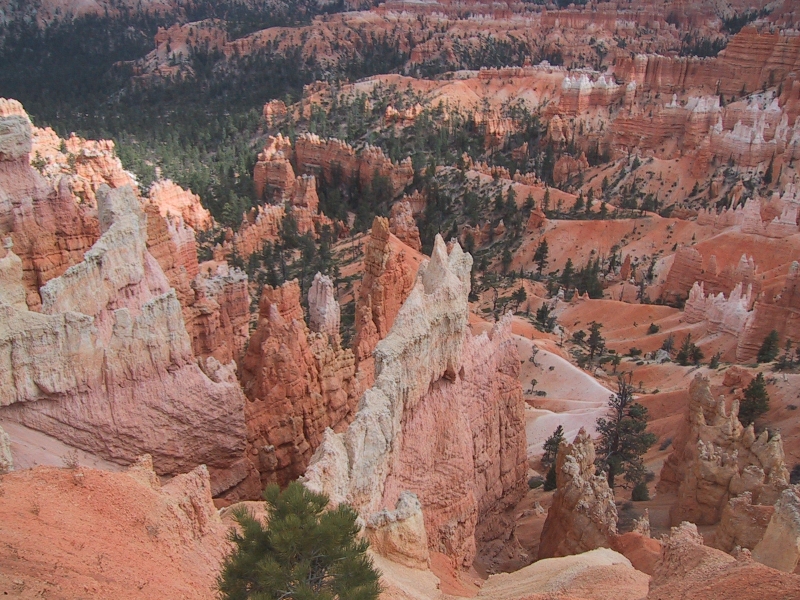 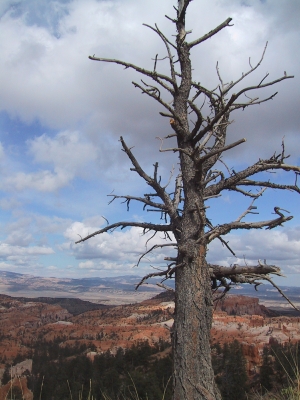 Bryce was gorgeous, as usual. We drove down Saturday, arriving around 4:30. It was really kind of cold, up on top of the canyon. But we warmed up a little, walking along the rim from Sunrise Point to Sunset Point, and once we'd headed down into the canyon, along the Navajo trail, we were out of the wind, so we were comfortable pretty quickly. The drive down was somewhat eventful. First, we followed signs out of Provo towards Bryce, which definitely took us the long (and scenic) way around. If you're heading down, I recommend that you stay on I-15 all the way to 70, at least, and possibly as far as 20, before cutting over towards Bryce. But that wasn't the exciting part. No, that was just long. The exciting part was that, after two or three hours of driving, I got my first speeding ticket. Sigh. We were heading into a small town, but the speed limit was still 65. I had been pretty carefully hovering between 70 and 75, which I thought was not unreasonable. Jed was keeping an eye on it too ('cause honestly, I'm still having trouble paying attention to everything at once, while driving). The cop who pulled us over said that he clocked me at 81, which I'm surprised by, since I never saw it go over 75, but I imagine he's right...I must just have been distracted for a few minutes. Nuisance! He kindly wrote the ticket for 80 instead of 81, saving me fifty bucks, so I can't complain too much. But still, it's frustrating, given how little I've driven and how hard I was trying to do everything right. 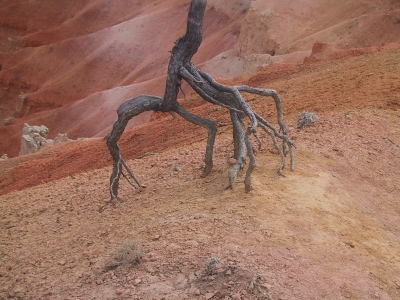 That's still not the most exciting part, though. I think I must have been getting pretty tired by that point; I don't think I've ever driven for more than an hour at a stretch before. I didn't feel particularly tired, but my right hand was cramping up (Jed says I hold the wheel too tight), and after we'd entered Bryce, at one point I must have just zoned out -- I drifted a fair bit into the wrong lane, and then panicked a bit when I realized it. Overcompensated in turning back, so we swerved a little on the road. Luckily, no one anywhere in front of me, but there was a car behind me, which had somehow disappeared by the next bend in the road. I think they decided they didn't want to be anywhere near such a lunatic. Can't blame them. Clearly, I need more practice. And I'm probably not ready to drive for hours at a time yet. Good thing Kev and I decided not to attempt the U-Haul thing; I probably would have ended up driving more than would be wise. Once we got to Bryce, we relaxed in a hammock stand for car camping for a few moments and then hiked about two hours, I think. It was a wonderful dramatic hike down Wall Street. It was getting kind of late, so instead of wandering through the Queen's Garden and coming up at Sunrise Point, we just did the Navajo loop -- which had the advantage of taking me through a section I hadn't been in before. I complained a lot, coming back up the canyon, but since I'd warned Jed about it in advance, I thought it was not unreasonable. :-) He took over the driving afterwards; we headed down to Glendale, and stayed at a charming bed and breakfast, Eagle's Nest. The owners were expatriate Californians, very friendly (and I suspect queer-friendly, since they talked with enthusiasm about some very interesting transsexuals who had been staying there recently). We had dinner nearby, at the Buffalo Bistro, which was basically a shack in the next-door KOA campground. Good food, though. Barely any vegetarian options, but a couple chicken things. We were really exhausted by then, and just collapsed when we got back to the B&B. The Oriental Odyssey room that they put us in was really very large, and had a fireplace; nice! The next morning, had a fabulous breakfast and a pleasant chat with the owners, and then headed down to Zion. 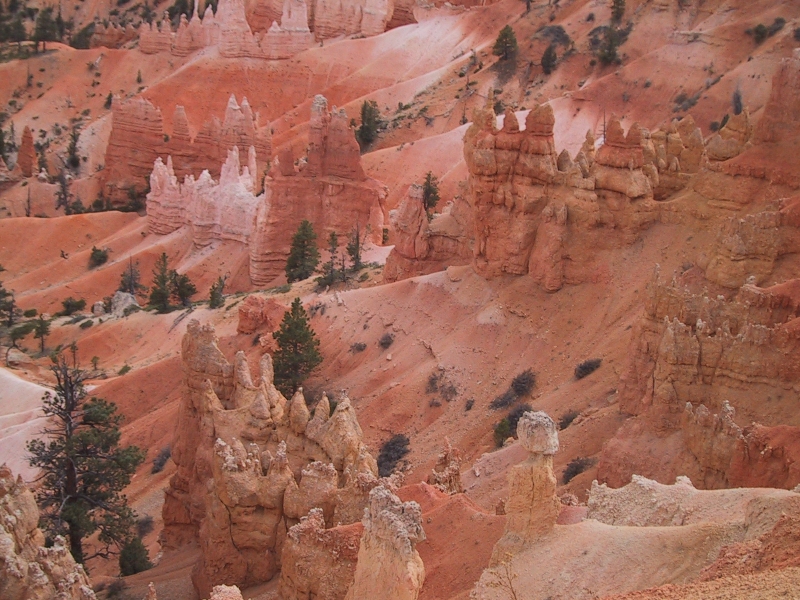