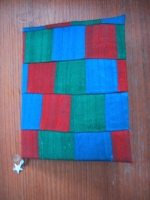 The second book of Milton is better -- great arguments among the fallen angels about whether they should go to war, just laze about hell, try to create a peaceful kingdom there, or go corrupt the humans to get back at God. Funny! I'm listening to Cross Country in the background -- it's the most religious music I own, which isn't saying much. At some point I'd really like to pick up at least one excellent gospel CD. Recommendations welcome. Joyful music especially...

In other news, finished the second book. (Technically, it won't be finished until tomorrow, when it's done pressing, but I'm done actively doing things to it, so good enough. :-) Very happy with how it came out! The camera doesn't really capture the dark intensity of the raw silks; the colors are a fair bit darker than what you're seeing to the right (the photo below is closer). Not sure why.

Huge thanks to Karen for e-mailing me quilting instructions -- or at least instructions for the first phase of quilting, which it turned out was all I needed. Irons are very helpful! In fact, I don't think you can really sew without an iron. Sewing machines are also helpful -- even with one, this cover took long enough that I may never do a patchwork cover again...without a sewing machine, there's just no way. It ended up using five strips of ten squares each -- I suppose if I'd used bigger squares, it wouldn't have taken so long, but it wouldn't have looked as good either. I *am* sort of tempted to do triangles at some point, just to see whether I can make stars and other shapes. But I figured that was beyond my meager skills at the moment. :-)

I'm including a large picture of the interior below, just so you can read a little of the story. Isn't my little star/ribbon bookmark cute? Sterling silver -- I assume the sparkly bits are just glass, but still, very cute. 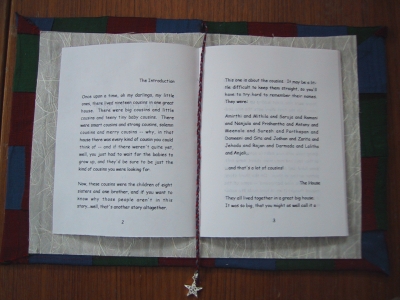