Facebook Instagram Youtube Twitter Patreon Shopping-bag
Menu
Mellow morning, aside from the little theological discussion. Mostly reading Lorrie Moore. She fascinates me -- an entire book almost entirely filled with pitiful people. Normally, this sort of thing would just irritate the heck out of me, but she handles the language so well that I'm willing to keep reading, just for the sheer pleasure of the prose. And occasionally, a story moves beyond simple examination of troubled moments in people's lives (or troubled lives overall) -- I particularly liked "Which is More Than I Can Say About Some People". The mother and daughter who visit Ireland in that story do end up finding...well, not what they were expecting at the Blarney Stone, but something. Something worthwhile. 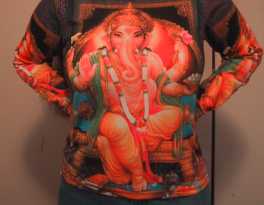 I didn't actually get any work done yesterday, so I need to buckle down soon. Errands took quite a while, but I don't care -- they were satisfying. Samosas at the Indian grocery store, along with some chili powder and fresh chilies. And they had frozen stringhoppers, imported from Canada! I love stringhoppers; they're a Sri Lankan food that's hard to describe. Steamed dough things, I suppose, but they look like vermicelli. Kind of. We'll probably have them for dinner on Friday, with a egg and potato curry. ('Curry' isn't the right word here, but I just realized that I have no idea how to spell the right word, which is pronounced so'-thee. I've never seen it written in English. Sothee? Hmm...)

I also picked up a t-shirt, just because I was walking by a store and it grabbed me. The colors were so bright and charming and the sun was shining and I felt very Berkeley. So even though shirts like these are clearly designed for tourists visiting the Indian quarter (I also tried on a couple selwar kameez, thinking I might wear one to Thida's wedding, but decided against), I went in and bought one. The Indian woman behind the counter looked at me kind of funny, like "why is a nice South Asian girl like you buying this tourist crap?" But then as she was ringing it up, she said, "It *is* cute, isn't it?" And I agreed. :-) I'm wearing it now, and it's a little like wearing sunlight. All yellows and oranges and reds. Someone once told me that Ganesha was the god of poets and thieves. I'm not sure if that's really true, but it's a nice thought, isn't it?

Elephants are just cool. And elephant-headed gods even more so. 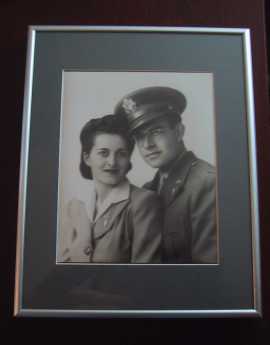 Also stopped by the art store and bought a couple frames for David's photo of his grandparents. I'm really happy with how it came out; the silver and grey seem very David -- it fits into his apartment and it suits the photo. Happy decorating joy. :-) His grandma was a babe, don't you think? Grandpa wasn't too shady either...

Aside from the shopping (oh, and books at Other Change, of course -- two Due, Melissa Scott's Point of Dreams and Jonathan Carroll's The Wooden Sea, both out in trade pb now), excellent food yesterday. Lunch at Panini with Susan; chai and sandwiches in a sunny courtyard, followed by dessert crepes at Crepes-a-Go-Go. I had lemon sugar; she had strawberry with chestnut spread. Very decadent. We talked for three hours straight, until it was time to come home. :-) Not really done talking yet, but luckily, she's coming for dinner tonight; we'll feed her Sri Lankan leftovers and watch The Lion in Winter, which neither she nor David have seen, which is just appalling. Luckily, that lack is about to be remedied.