Facebook Instagram Youtube Twitter Patreon Shopping-bag
Menu
Ooh, groggy. I ended up talking to Karina last night, then Kevin called, then Jed. I only talked to Jed for a few minutes until I was truly collapsing; it was past one at that point, I think. So I asked him to sing me a lullaby and then crashed hard. One of the nicest things about Jed is that he doesn't hesitate when you ask him for bedtime songs. Most of the other people I've dated flatly refuse to do such, and even the ones that do them have had to be coaxed, which takes some of the pleasure out of it. The only other person who was as good about lullabies was my roommate Cliff -- he knew some good lullabies, too. 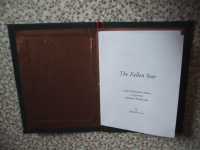 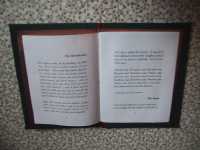 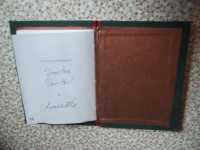 This is the book I made for my cousins, The Fallen Star. I'm pretty pleased with it, though I did finish the story in a hurry, so it's not as sharp as it could be. And the cousins really wanted one for each of them (which would have been nineteen instead of nine). Maybe next year I'll start enough in advance that that's feasible. Still, it was lots of fun making these, and really only took about two full days for the whole thing. Probably should've spent three and edited more. I guess next year I'll allocate two weekends and try to do nineteen -- unless I come up with a different project altogether. I like this making stuff. :-)

I think I'm actually going to exercise today, so I'd best go do that now, before resolve fails entirely. :-) Then tea, then settle down to some work. I had thought I'd do academic stuff today, but really that can all wait until tomorrow, so I think I'll try to do all the SH stuff I didn't get to yesterday. The whole moving files thing took longer than expected. I'm also importing all my CD's (about 75) onto my computer; it's a bit slow, but I can do other things while the import runs, so it's not so bad. It's going to be very comforting having my whole music library with me when I work. It's not unreasonable to allocate a quarter of my hard drive space for music, is it? I can always delete them if I start running short of space. But really -- 20 gigs ought to hold me for a while. I was struggling along on 2 gigs on the old computer.

In the interim, why don't you check out the new issue of Strange Horizons? Interview, story, poem, review, and even an editorial for your reading pleasure. Enjoy!