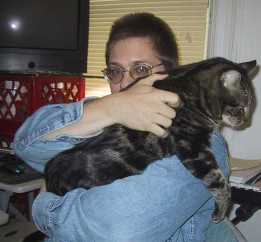 Blast from the past. I exercised and made tea, read the delightful Father Christmas letters, and then settled down to editing the images from New Year's. I have tons of photos floating around my new desktop and I want to process and file them! In any case, here's a new photo of an old friend -- that's Paul Estin, who I dated for about a year and a half, starting spring of my sophomore year, I think. It was lovely at first -- we met at a theater party, then I invited him over to see my bookshelves (no, really), and before long, well, y'know. He was my second real boyfriend (the first one had dumped me painfully midway through my freshman year, and I took a while to recover). Paul was three years older than me, and about six months after we started dating he moved to Ann Arbor to start a Ph.D. at the University of Michigan. Long-distance after that, with many long train rides between Chicago and Ann Arbor. Eventually, things started to get more and more strained between us, ending rather dramatically and messily. The worst of my break-ups by far. But after a few years of silence, we ended up getting in touch again, and now I think you could even call us friends. Which is so nice. I hate losing touch with old loves; they know me so well, and it's strange to think of someone who knows me that well wandering around somewhere, doing who knows what? I'm all about networks, I am. 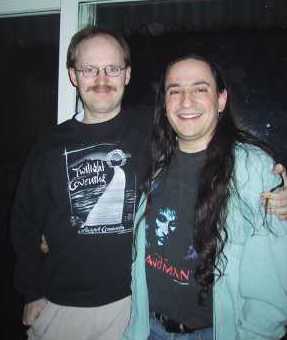 Here's another bit of my history -- Matt and Mort were roommates for much of college, and good friends of mine. They're on opposite sides of the country now (we were all at Ellen and Tim's for New Year's, which was just delightful), but still close. Matt ended up working in massage therapy -- Mort's a techie. Most amazing -- Mort is going to be a dad! His partner, Catherine (never sure how she spells it), is a grad student at Stanford and now several months along. I can't tell you how odd it is thinking of Mort as a father. I remember him at eighteen, goofing around in the dorms, moaning about how he was going to stay a virgin the rest of his life... :-)

It's awful and wonderful having so many friends. I can't keep up with them all -- not even close. But they're there, and even if we just check in once a year, or even every few years, there's a fondness and caring there; any one of those people could arrive on my doorstep and crash here for a month, should they care to. (I admit, this was more likely to happen when I lived in Oakland...) They knew me when I was just starting to be a grown-up, and when I'm with them, I remember how scary and fun a time that was.