Kev: So, you know how we were comparing Expedia and Yahoo prices for airfares? I found another one, Orbitz, that has better prices.
Me: Good to know, though I don't think I'll be buying tickets again for a while...
K: Chicago to Salt Lake round-trip is only $120, even if I leave tomorrow morning.
M: Funny, considering you'll be out here in two weeks.
K: Actually, I don't really have any plans for this weekend...

I went to sleep Friday night, and he showed up Saturday morning. He's staying until Tuesday morning, and it's been lovely having him around. The line between friend and boyfriend is a little blurry at the moment, but I've been pretty happy and calm, so I'm not going to worry about it right now. That's one reason I haven't posted in a few days. The other reasons are: 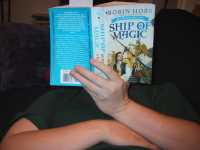 Now it's snowing, and Kev is still fast asleep; I woke up at 4:30 or so to go to the bathroom, and found him still reading on the couch (and reading the book *I* was reading, Robin Hobb's Ship of Magic -- hmph!) -- this is not going to be conducive to his getting back to normal teaching hours. Though I suppose he doesn't actually have any more teaching to do this semester -- just an exam to give on Thursday, so it's not so bad. I still have two more classes to teach this week before the semester's done here.

I've been working steadily this morning, mostly on our lovely new Frank Wu store! Isn't it cool? T-shirts and mugs and tote bags and tank tops, all with Frank's fabulous "Slugball" image -- chick with a big gun! :-) We've put a $3 markup on each item, so for every one you buy, $1.50 goes to Frank, and $1.50 goes to Strange Horizons. There's even a Xmas ornament, only available until the end of the year, so don't miss your chance. :-)

When I have time, I'll add more illustrators; I think I'll ask Wolf Read to work on these next. His Japanese-style pen and ink piece will be a nice contrast to Frank's full-color extravaganza.

This afternoon, I need to do some marking up of student monologues, and then I think I'll work on the POD book. That was all supposed to be done by the end of yesterday; I lost a day to illness. I had hoped to spend today working on my next paper for class, but I think that'll have to wait until Wednesday. So it goes...

4:20. Almost forgot -- today's the last day of the SH Survey! If you've been putting it off, please do stop by and fill it out today -- the info we're collecting will be very valuable to us. Thanks! And while you're there, check out the new interview with the amazing James Morrow (I loved his Only Begotten Daughter), the new story, "Fiddler", by Harry LeBlanc (with an incredibly gorgeous illustration by Shelton Bryant), a new poem, and a new review, and a new art gallery -- yes, it's another terrific week at the best little spec fic magazine in town. :-)

Now I need to go steal my book back from Kevin; I've been steadily working on putting together the SH Best of, but it's repetitive cutting and pasting work, and it's strained my hand and arm, so I think I'd best take a break for a while. Until later, munchkins.