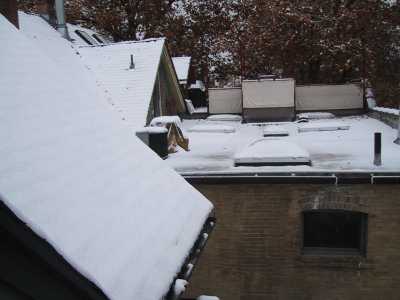 I'm feeling much better this morning, thanks. After I finished my entry last night, I read a fluffy fantasy for a bit, but it only distracted me temporarily; when I put it down, I was still sad. So I called Jed, who was luckily home, and wept at him for a while. This break-up -- I just keep encountering things that I didn't realize I'd miss, or that I didn't realize how much I would miss. Kev's folks are like that. There was a time when I was getting along very badly with my own parents, and I can't tell you what it was like, having his parents willing to just take me into their home, to be able to assume I'd be welcome for Thanksgiving and Christmas, to have them treat me a little like a daughter. I really needed that, for a while, though I'm not sure I knew it.

It's funny -- we call ourselves adults at 21, and in some ways we are, but it's only very recently that I've actually started to feel myself enough to not want desperately to have parents to lean on. Oddly enough, feeling that sense of self has made it much easier to deal with my own parents; slowly, we're working to heal the breach. It's good. I used to go months without talking to them -- once, my mom and I had a fight and didn't speak for six months. (Her choice.) Recently, I took a page from David's example, and started calling them every Sunday. So far, so good. We'll see how it goes.

In any case, wept at Jed last night, was comforted, fell asleep content, woke up happy. The surprising thing this morning was the snow. I shouldn't be surprised; various people have been eagerly anticipating it in my department. But somehow, I think part of my brain expected it to hold off until December. I don't know why. In any case, it's rather lovely, if a bit grey at the moment, since it's still snowing and no sunlight is getting through. But nice nonetheless, and a good excuse for putting up my Christmas lights in the windows. (The decorations will wait until December 1st. I have strict rules about this sort of thing.)

What I am missing is my Karina. It doesn't seem right, having snow without a Karina in it. Snow in her hair and hat, a big smile on her face. In a little while, I'm going to put on my boots and coat and go tromping off to the art store to pick up some supplies for Xmas presents. It would be so much better, having a Karina tromping beside me. Maybe I'll just close my eyes and imagine her there. I know what it looks like, having a Karina with you as you walk through the snow... 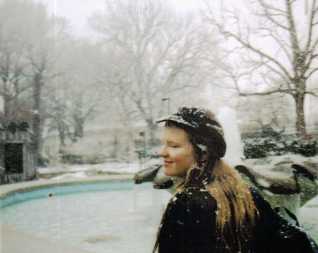 1:30 p.m. I was working on a fun project all morning, and I would tell you all about it, but I can't, because it involves a present for someone who might read this. But I can tell you the general gist -- I spent the morning scanning in and editing some photos. I'm going to print them out, probably on photo paper, and then make them into a book! I'm not positive what kind of book yet; I bought a book on bookbinding, and I spent the last two hours making a practice book. It's not particularly difficult, but it does take a certain finickiness if you want to make a nice, neat book with hardcovers, fabric binding, and endpapers -- the kind that looks like those writing journals you find in spiffy bookstores. I'm almost done with this one; I made the inside pages (the bookblock) and the case (cardboard and fabric and glue), and now the case is drying. In an hour or so, I'll attempt "casing-in", the process of attaching the case to the bookblock. I expected the whole process to be harder than it was; I was able to make what I think will be a decent little book just out of random stuff I had around the house, in about 2-3 hrs of work total (plus drying time). If I decide I do want to make this kind, with covers and all, then I'll go to the art store tomorrow (I put off my walk, so that I could make a practice version first) and get proper bookbinder glue, so that my book will actually hold together over the eons. :-) Possibly also some archival-quality paper.

The other option is to make a book with Japanese binding, which is much simpler. I'll probably make a version like that today as well, and see which one I like better. I can see advantages to each.

If I have time, my actual plan is to make two different books this Xmas. One will be a children's story for my relatives (I'll need 9 copies of that), and the other...mmm...let's just say that I'll need somewhere between 1 and 5 copies, depending on what I end up doing exactly. Since the Japanese binding looks easier right now, I suspect I'll end up doing Japanese binding for my relatives' books, and a hardcover binding for the others. We'll just have to wait and see.

It's nice to have a project for my evenings, though. I like crocheting, but I can only do about an hour of it before my fingers start cramping up. This should be fun to do in front of the television. 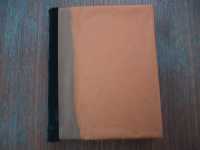 3:30. Did some laundry and took the book out from under its weight (where it's being pressed and drying) for long enough to take some photos. Let me tell you about what I did wrong, so that you may learn from my mistakes, young Jedi. 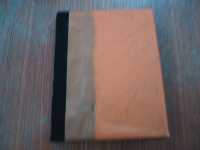 Firstly, I don't recommend choosing a binding fabric that is thicker and heavier than what you're using as a cover. The binding goes on first, and in this case, the heavy green velvet shows through clearly under the translucent orange paper. Not good. (On the other hand, the velvet does feel awfully nice. Maybe use it for the cover instead?)

Secondly, they're serious when they tell you to be neat with your binding; as you can see from the first two photos, I had uneven amounts in front and back of the book. Less of an issue if the cover actually covers it, but I imagine you can probably still feel the binding with your fingers, so better to be neat. I started out neat, but got more slapdash as I went, since this was just a practice piece. I was rewarded accordingly. 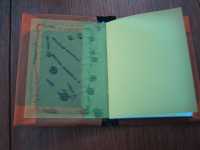 Thirdly, use the kind of glue they recommend (either buying bookbinder glue, or making paste out of flour and water). You're supposed to slop some on and then brush it thinly and evenly across the paper. Not make some squiggles with craft glue and then just press it down. As you can see, not smooth and professional-looking!

Fourthly...well, actually, the fourth and fifth pictures are fine. The light yellow translucent paper I chose for my end papers is very pretty (although it did show through the edges of the cover paper, so you might want two different end papers; a thicker one for the inside cover, and then a pretty light one to go next to the actual paper. Still, not bad. And the center of the book has a very easy hand-sewn binding; I'm a little stunned that it's actually enough to hold a book together. Who knew? Nice and neat. 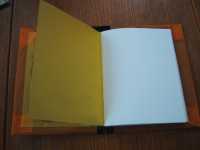 Overall, I now have a functional if not particularly attractive book, and have a good sense of what I'll do differently next time. It does seem rather flimsy -- 24 pages is not a lot to have pressed between stiff cardboard. I think I'll use heavier weight paper for the next version (which may mean working a little harder with the binding; I'll probably pick up a thicker needle tomorrow, as well as an awl or bodkin (which I need, as it turns out, to try the Japanese binding). I may also use lighter cardboard for the cover; the one I used is wonderfully sturdy, but was a pure bitch to cut through. I ended up using an exacto knife, a pair of scissors, and my heavy-duty kitchen knife...and I still had somewhat ragged edges. Which I guess is okay, since the binding covers them, but it was annoying. That was the only part of the whole process that was actually difficult -- the rest was just finicky. Be sure to have a ruler or tape measure if you try this, and I do recommend picking up a book of instructions, or poking around on the web for them. 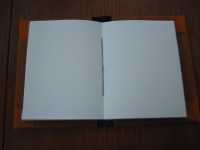