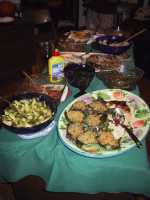 Hey, munchkins. Survived the holiday okay? I did, mostly at least.

Woke up way too early this morning, not sure why. Luckily, I had some silly movies that I hadn't watched yet, so I popped in Legally Blonde. Truly pretty pointless, but amusing nonetheless, especially at 6:30 a.m. when one is very tired. After I finished that one, I started cooking, but very very slowly. Started my favorite Thanksgiving recipe, the one I make every year if I possibly can, Savoury Sweet Potatoes. (I actually usually make it with yams.) This is a recipe I've been making since my college days; I found it in a newspaper one year, under 'low-fat tuber recipes'. :-) I talked to Kirstie briefly while I was cooking and she reminded me that she had been there the first time I made that, and said that not only was she making it this year too, but that she often made it for dinner because she liked it so much. I don't do that, because I'd rather save it for special occasions. But boy, it's good. Go try it! Very yummy!

So I got the yams started, and then put in A Knight's Tale, which actually turned out to be a much better story (and funnier) than I expected. Pleasant surprise. Not that it's brilliant or anything, but it's solid and rather clever, sort of in the vein of Ten Things I Hate About You. I paused it intermittenly when I needed to turn the yams over or chop stuff and put them in the oven. Nice mellow morning. 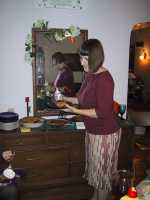 Around 10:30, I started cooking in earnest. We were doing a potluck among some of the grad students -- but not really a potluck, in that we planned it all in advance. Heidi and her sweetie (husband?) were bringing dessert -- she made two pumpkin and one deep-dish apple pie. That's Heidi, helping herself to some pie. She's a doll, and her sweetie is a big comic geek whom I loaned Why I Hate Saturn (which he loved), and the first Strangers in Paradise, which did nothing for him. Oh well. It was still nice to see them, and the conversation got very geeky at several occasions, since they're also Star Trek fans. We totally ripped apart this week's episode, for example. What were the writers thinking? Just lame and heavy-handed and much duller than the teasers promised. 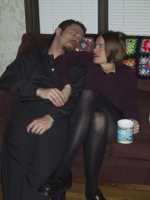 Jenn and David brought the turkey, which was very lovely. Also a sausage-apple stuffing, which was utterly delectable. Gods, I love stuffing. I had three helpings. :-)

I made some other food in addition to the yams. The biggest hit was probably the Winter Squash Soup with Gruyere Croutons. I actually skipped the croutons -- not worth the effort with so much other food around. I also set some soup aside before I added the cream, because Jenn's allergic to dairy -- I tasted it, and really, I think the soup is pretty damn good even without the cream -- and without it, it's a really healthy recipe. Squash is good for you, right? Not too bad for you, at least. I made it with veggie broth last time and it came out fine, so it's a good vegetarian dish. I think it's going to become my standard winter soup. 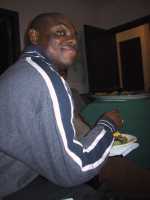 I made a green bean dish, but I'm not happy with it, so I'm not going to bother pointing you to it. It was okay, but not great. What was great was this Stuffed Marinated Portobello Mushroom recipe. I think this is the third time I've made this, and every time, people (including myself) have been very happy with it. Usually I serve whole portobello mushrooms as an appetizer, but this time, I bought huge ones and cut them in quarters for appetizers (see the dish at the bottom of the picture at the top of this entry). Very filling even so, probably too much so for Thanksgiving, really. But perfect for a dinner party. 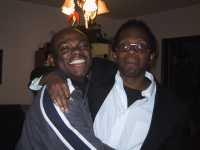 It was a really nice crowd; some of the usual suspects, plus some new people. That's Edward at left; he's a new MA in lit., I think. From South Georgia, and very sweet. And here he is again, with DeNorris, who I *believe* is doing an MFA in poetry. Honestly, I have trouble keeping everyone straight. I think I'm just slow.

Mostly I enjoyed myself very much. There was laughing and silliness and stuffing ourselves and very delectable food (Paul and Marcia made brussel sprouts and corn on the cob and mashed potatoes and gravy -- it was a proper Thanksgiving feast). There was good fellowship and affection. There was a little department chatter, but only enough to be bonding, not enough to be overwhelming. Sometimes it seems like the department is all we talk about, but not today; that was good.

I thought I was in a pretty good mood. I had started to get a little sad this morning, but had quickly drowned that in cooking. And then I was busy having fun. But at one point this evening, someone made an innocuous comment that just rubbed me the wrong way, and I got irritated -- but that wasn't the real problem. The problem was that as soon as I got irritated, I was suddenly on the verge of tears. Which made me realize that I really wasn't as okay as I thought I was. I went and did dishes until I calmed down. Everyone was very nice to me; they didn't really know what was wrong, but they knew something was up.

I miss Kevin. It's nothing complicated; I'm just used to spending most holidays with him -- either Thanksgiving or Christmas, and sometimes both. And I could have spent it with him, but going to his parents...that would have been too difficult this year, I think. If I'd asked, he would have come here, or I could have gone to Chicago, but I hate to keep him from seeing his folks; they're lovely people, and they don't see nearly as much of their only son as they would like. So. I had a cooking question this morning -- or specifically, a question about whether a pan he had given me was ovenproof. So I called his mother's, not really thinking about it; I was distracted by cooking issues. And maybe deep down I wanted to talk to her, to hear her voice. Not sure. But I said "Hello, Ann, it's Mary Anne." And she said, "Hello!" And I said, "Happy Thanksgiving!" And she said, "Happy Thanksgiving to you! I'm sorry you're not here with us this year." And I didn't know what to say. I know Kev's sister knows that we broke up; I'm not sure if his parents do. Probably. We've always had a friendly relationship; not really close, but mildly affectionate. I like them both, a great deal. It was so strange, hearing her say that, not sure if she knew that it was unlikely that I'd be spending another Thanksgiving or Christmas with them. 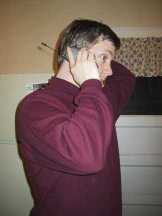 This is a picture from last May, when I was living with him in Chicago for a month, and we were moving his things from his apartment to the new condo. The one that I thought I'd be probably living in next year. And I probably knew, deep down, that it wasn't really likely to happen...that we might do it, but that it wouldn't be a good idea -- for either of us. And yet.

All the people I spent Thanksgiving with are delightful. I am thankful for their friendship and care -- most especially Paul and Marcia and Jenn and David, who have been so lovely to me. They've made living in Salt Lake not just bearable, but actually reasonably pleasant. I'm also thankful for my work -- gods, I can't tell you how thankful. I would have fallen into a black pit of despair without it, I think. If I had still been doing the kind of mindless filing work that I did for years...ugh. Too ugly to think about. Tomorrow, I'll probably work on the POD book; this weekend I may start some academic papers. That's all good, and sometimes even great. I'm, of course, also thankful for my long-distance friends. I think they know how much. David and Jed have had far too many late-night phone calls from me the last months. I need to start weaning myself off that habit soon. But not just yet, I think. I am very thankful for my Jedediah especially. He's so good to me.

But however wonderful everything else is -- and it is honestly wonderful -- it's not Kev. And right now, I would give a lot to have him here. Not doing anything in particular -- he could be chatting on the phone, just like in the picture. But he'd be here, and I could feel his presence in my apartment; I could listen to him talk; I could, if I chose, get up and go to him and lean against his chest and he would hold me.

Maybe next year, I can just be thankful to have had him for as long as I did.

I'm not there quite yet.