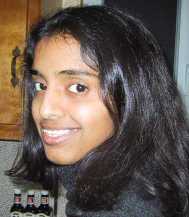 So, Sharmi's given me permission to post photos of her here (she said especially if I was going to say she was cute :-) -- I won't be flooding y'all with them, but you can expect to see a few. I know I haven't said much about her; she's my younger sister, by eight years. She did college at Tufts, and is taking a year off from school before starting med school next autumn at U Conn. (This doesn't mean she's goofing off -- it means she's doing research instead of school. I think she should goof off more; I'm trying to coax her to come out around January, and have even promised to go (gulp) snow-boarding with her). We've always got along very well; the eight year gap is enough that we didn't really have sibling-conflicts growing up. We share an idealistic streak (Mirna does too, but I think she hides it better under a layer of fierce pragmatism). We talk fairly often these days; I guess that started a few years ago while she was in college. Mostly about books and career choices and such, but sometimes about love and family and just life...

She had shoulder-length hair the last time I saw her, at Christmas; now it's very short, and she looks like a pixie from Midsummer Night's Dream. She's as slender as one too -- she got the skinny genes in the family. My middle sister is slender too, but she's careful about what she eats and works out a lot. Sharmi is just thin -- thin enough that I think she should eat more. :-) They're both much more stylish than I am; they seem to keep up with the current trends effortlessly, and always look like they've just walked off the set of Friends. They are very cool little sisters. I should ask Mirna if I can post photos of her too...

In other news, finished the Foucault. Am horribly behind for this week -- haven't read the short Melville novel we're discussing in class today, or any of the associated critical reading for either class. I'm printing out Althusser's "Ideology and the State" right now, but I won't have time to read it before class. At least I'll have it with me for a reference. I'm something like ten or fifteen essays behind right now; this weekend I think I'm going to have to do a binge reading spree to catch up. It's travel plus a little too much time spent on SH stuff (which is just more fun that reading about ideology and state, I have to say). The goal is to be caught up by Tuesday, so that I can goof off some over Thanksgiving with a light heart. We'll see how it goes.

Kevin called last night and we talked a bit. Trying to decide whether we should try to see each other before Christmas, and if so, when and where. The big advantage to my going to Chicago is that I get to see Roshani and Zoe too. Baby's talking and walking!!! Not a lot, but still. She wasn't doing that last I was there, and I wanna see. I'm guessing that unless something else intervenes, I'll end up going out there around mid-December, then going on to the East Coast. Might go straight up to Boston at that point, since Todd and Debby are leaving fairly early to drive South for Christmas. All in flux. We'll see. Means I should get moving again on that baby afghan, though -- it's only about a quarter done.

readings in a lost november

the room is warm, and I lean against a window,
sipping apple tea and listening to an essay
that I have heard before. it's a little different now,
better, I think, though it is hard to say; it's always
hard to say with readings, when the words
flow and rush and disappear, refusing to let you
re-enter; they have already moved beyond you
and into the next poem. one poet dances up
and down the alphabet, lingering on A for pages
which feels appropriate, since A is important,
and K is really only good for kissing. well, no --
but it could be and is for a few minutes until
we break for chocolate and glazed donuts,
then return. the new poet sings, slides up and
down melody lines, and the harmonies are buried;
you could pretend there were only melodies
if you cared to. but we know better; we know
that she takes old films and projects them onto
women's bodies; educational films, and one of fish
hangs in my living room over the television.
I think my fish are watching the photograph.
this is a poet who works in layers. the last takes a
piece of a novel; she draws a map on the board,
and tells us who and what and where and why
the girl in her story is diving in the water. I am
listening to her story, and the words are sliding by
me and like the girl in her story, I am getting lost
in the past, in the words, in the sun on the water
pulling words up out of the girl who is losing herself,
getting lost in the past, in her father and the boat
and the words and the darkness underneath and the fish;
it always comes back to the fish, doesn't it?