Facebook Instagram Youtube Twitter Patreon Shopping-bag
Menu
Well, two quick rejects from Glimmer Train -- ah well. I think I'm going to hold onto "Beth and Julie's Wedding" for now; it's really more erotica than literary fiction, and I don't know of any open anthologies that it'd be appropriate for at the moment. But I'm sending "Sister Mary" out to the New Yorker -- we'll see what they think. At least, I hope we will; they still have "Monsoon Day", that I sent them back in June. Normally I wouldn't send two pieces to the same publication at the same time, but I figure they'll be sufficiently far apart in the stack that they won't even notice. 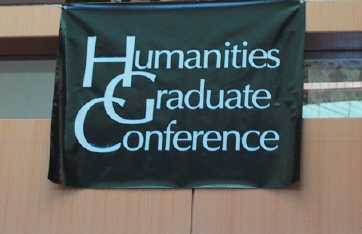 I got a charming e-mail this morning from the director of graduate studies in my department -- it went out to the whole department, and among other lovely things it said, "Those of you who attended last weekend's inaugural Humanities Graduate Conference won't need to be told how impressively well-organized and successful it was....the entire event should be a source of pride to the department, the college and the University of Utah as a whole."

I'm still taking in the fact that it's over, it's really over. By the day of, there were so many tiny details coming together; it's a little astonishing to me that it all worked. Jenn was the one holding all the pieces together, and she just did an amazing job. She sounded rather frayed by the end, but didn't fall apart. I'm so impressed. I'm not sure I would have done so well, creating a conference from scratch, dealing with all sorts of people and their concerns, with tact and consideration. Although everyone pitching in helped, of course. Her fiance, David, (also in the program) was great on the day of, running all kinds of little errands and being one of the general fixers. I love this photo of him struggling with the recalcitrant patio table umbrellas... 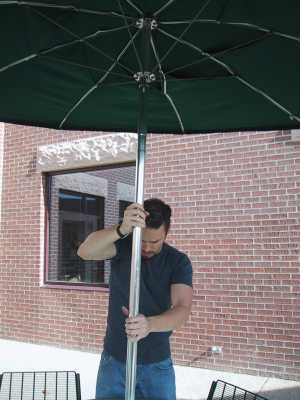 Brenda and I spent a while trying to get those open, looking for a hidden latch, etc., until we finally decided it was just a matter of brute force -- and force neither of us possessed. David and his manly muscles came through for us, though. :-)

I should get back to work; today's a day for paper & intro-writing, and I can't really afford to slack off on it. Also a few student things to comment on, but not so much. If I work steadily all day, I should be fine for tomorrow. I have to spend a little time thinking about the class I'm teaching tomorrow -- we're doing structure this week, and I'm not quite sure what's an appropriate amount to give an intro-level class. Flashbacks, certainly, but what else? That's the question... gods, I love my job. I can't believe they pay me to think about this!

2:15. Well, it took a little longer to get to it than I expected -- I had quite a stack of e-mail piled up. But I've finished the first draft intro of W, and sent it out for comments to the Melcher editors and the readers' list. Feel free to hack at it, please -- it's very rough, and I'm afraid a little depressing/scary as it stands. I know it needs lots of work. Still, it's nice to have a draft done; that's sort of comforting.

I'd like to just dive right in and do my American Studies paper (a relatively straightforward reading of filial duty in Charlotte Temple), but I think I should give my arms a break, since I've been at the computer all day so far. I'll do some dishes and mop the kitchen floor, maybe work out a little. That should serve for a nice break from the computer.

And if you're looking for a nice break from your Monday work, stop by SH! We have an Author Focus issue this week, with the focus on the delightful Joan Aiken. If you've only read her famous Willoughby Chase novels, then you're in for a treat, becuase we have a great short piece of hers, "The Rented Swan", along with two poems, an interview and two reviews (one by my own Jedediah, who is a big fan of her short fiction). If you haven't read anything of hers...well, you should. Right now. She's just a terrific writer, and I've loved her novels since I was a little kid. I was always very impressed by the way she mixed politics in with kids' stories; only Lloyd Alexander did it so well, with his Westmark trilogy. Great stuff! Kudos to Susan for putting this issue together!

10:40 p.m. Long working day. I'm going to be underprepared for class tomorrow; I suppose it was to be expected. Still haven't written my paper either, although I have high hopes that if I write an intro tonight, I should be able to whip through the rest tomorrow morning before going in (it's only 4-5 pgs, ds, which is hardly anything)... In the meantime, I'm trying to get at least enough of the reading done as will keep me from being utterly lost tomorrow. I am presently being seduced by Emerson, and thought I would give you a taste:

"Books are the best of things, well used; abused, among the worst. What is the right use? What is the one end, which all means go to effect? They are for nothing but to inspire. I had better never see a book, than to be warped by its attraction clean out of my own orbit, and made a satellite instead of a system. The one thing in the world, of value, is the active soul." -- from The American Scholar, an address given at Cambridge

I had him in college, over a decade ago; it's rather delightful returning to him again, after all these years...

"The office of the scholar is to cheer, to raise, and to guide men by showing them facts amidst appearances. He plies the slow, unhonored, and unpaid task of observation....In the long period of his preparation, he must betray often an ignorance and shiftlessness in popular arts, incurring the disdain of the able who shoulder him aside. Long he must stammer in his speech; often forego the living for the dead. Worse yet, he must accept, -- how often! poverty and solitude. For the ease and pleasure of treading the old road, accepting the fashions, the education, the religion of society, he takes the cross of making his own, and, of course, the self-accusation, the faint heart, the frequent uncertainty and loss of time, which are the nettles and tangling vines in the way of the self-relying and self-directed; and the state of virtual hostility in which he seems to stand to society, and especially to educated society. For all this loss and scorn, what offset? He is to find consolation in exercising the highest functions of human nature. He is one, who raises himself from private considerations, and breathes and lives on public and illustrious thoughts. He is the world's eye. He is the world's heart. He is to resist the vulgar prosperity that retrogrades ever to barbarism, by preserving and communicating heroic sentiments, noble biographies, melodious verse, and the conclusions of history. Whatsoever oracles the human heart, in all emergencies, in all solemn hours, has uttered as its commentary on the world of actions, -- these he shall receive and impart..."

I'm not really a scholar, not in this sense. I dabble in scholarship, but my real desires are elsewhere, in creating and building my own fabulous worlds. But I know a few true scholars, and I admire them -- even if they also sometimes drive me a bit mad. And like Harriet Vane at Oxford, I do occasionally feel a strange yearning for that directed life...

"If only one could come back to this quiet place, where only intellectual achievement counted; if one could work here steadily and obscurely at some close-knit piece of reasoning, undistracted and uncorrupted by agents, contracts, publishers, blurb-writers, interviewers, fan-mail, autograph-hunters, notoriety-hunters, and competitors; abolishing personal contacts, personal spites, personal jealousies; getting one's teeth into something dull and durable; maturing into solidity like the Shrewsbury beeches..." -- Gaudy Night, Dorothy L. Sayers