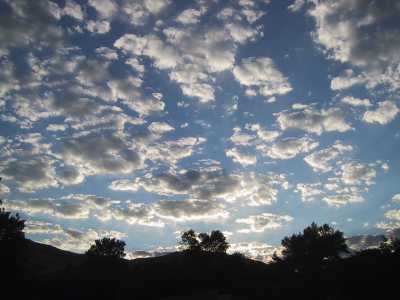 I woke up early this morning, before the sun rose. That's not so hard right now -- it was only around 7 or so. I've been sleeping later for a while; it's hard to imagine that there was a long time when I went to bed at nine and got up at five. Definitely not the norm these days. But it was nice, lying in bed, waiting for the sun to rise. When I got up, it was just about to clear the mountains, and the sky was full of puffy clouds, lit underneath by bright sunshine. Cool and clear and gorgeous. It'll be too hot later today, but the morning is awfully pleasant.

I checked mail briefly and then settled down to writing. I have about a page left at this point, and another hour and a half before I have to leave; I should be in good time. No real time for revising, of course. Ah well. My best guess is that I should get either a B+ or an A- for this paper; we'll see what Howard thinks of it. I can at least skim through and check for active verbs, decent transitions, and clear referents; apparently, the lack of such bothers him greatly. Reminds me of some people I know... :-)

I did break for a bit partway through to have some breakfast (leftover part of sandwich from last night) and read a little MZB; I was reading Hawkmistress last night, and was reminded again how good a storyteller she really was. And her people have very rough edges sometimes; I like that. Real people do stupid things that embarrass them; sometimes that truth doesn't make its way into books. Maybe even my books -- something to watch out for. It's easy to make your people too pretty, in lots of different ways.

Speaking of pretty, I'll leave you with one more photo. One of the nice tricks of my camera is that it can take several photos and stitch them together to create panorama shots. The photo below is composed of five different photos. The lighting seems a bit inconsistent; I suspect that I didn't focus them exactly the same or some such. But generally, I like it. It'd be kind of cool to do a really broad panorama, but that's not going to happen anytime soon -- this one used so much memory that just after it saved the photo, it crashed my computer. Poor baby. I think five massive image files is about the limit of what it can hold in active memory, at least if it's manipulating them and creating one mongo image file at the same time. Good to know, at any rate, and I really am fairly pleased with the result.

11:30. Paper done! Presents wrapped and ready to mail. Gosh, it's nice finishing things on time. In a few minutes, I'll go catch a bus to campus, drop off my paper, send mail and deposit some checks. I just received the $100 check for winning the Scowcroft Award last spring -- my first literary award! I feel like I ought to do something cool with the money, but I suspect the coolest thing I can do is to pay off some debt. Well, we'll see. Perhaps there will be some little computer peripheral or other than will strike my fancy, or some writing books, or perhaps even a game... I figure if you aren't self-indulgent once in a while, then you're not really living life properly. (Of course, I'm probably self-indulgent a fair bit more than once in a while, but we won't go there...)

At 12:30 I'm attending a luncheon colloqium with James Welch, a visiting novelist. I feel a little odd about going, since I haven't read any of his work, but perhaps I'll learn something anyway. And if not, free food! Graduate students don't generally turn down free food...

Then I come home, and if possible, work some more. Either on SH stuff or BW stuff (only a little of it to do at the moment, so I could theoretically get actually caught up) or course stuff. On the other hand, I might just goof off the rest of today. I reserve the right to do that. What with getting sick and all, it's been a longish week.