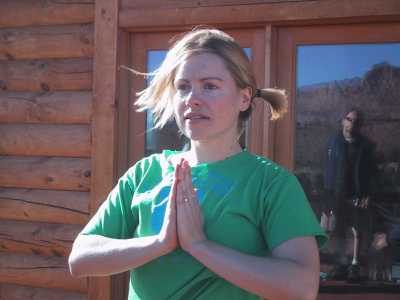 Hey, guys. Another photo for you -- this is another of the cool reflection photos. That's Jenn, in the midst of morning yoga (she kindly let me put this picture up -- I'm not sure I would have let somebody put up a photo of me working out. :-) In the reflection is David, her fiance. I wish I could take credit for having planned that, but it is only a happy coincidence. (You're getting to see lots of the local people, aren't you? Have I shown you what Paul and Marcia look like yet? I can't remember...)

I'm not being as productive tonight as I'd like -- had a fairly busy day, as planned, and when I got home, instead of settling down to write the paper that's due tomorrow at noon, I watched tv and wrapped birthday presents for a certain Australian. (Which will sadly not likely get to her in time, 'cause I'm a goober -- I need to set my Visor to remind me much further ahead for her birthday...)

But it's now 10, and I've just made a cup of tea (decaf) and I'm thinking I might be able to crank out a page or two before I go to bed. This is not the ideal way to write a paper, even a little 4-5 page paper like this one. In theory, one writes it in advance, gets a Jed or David or Kevin or Karina to check it over for logical holes and grammar mistakes (if one is fortunate enough to have one of them available to one), sets it aside for a while, comes back to it with a clear head, etc. and so on -- in the end, handing in a thoughtful, grammatically-spotless, well-argued paper. Instead, we get a moderately thoughtful, hopefully not-too-messy, last-minute jobber. I would normally hesitate to admit such publically, for fear of the professor finding out what a goof I am, but since I met with him today and talked over my thesis, he already knows that I haven't written anything yet. Ah well. It's due at noon tomorrow (which means I need to leave home by 11:30). Get the thesis down tonight and the first page, then up by 7, and I should have plenty of time to draft 3-4 more pages. It's funny -- whether I'm writing fiction or academic stuff, I tend to draft at a rate of about one typed page per hour. Very consistently. You wouldn't expect it to be so consistent, but there it is.

(See, Shmuel? You're not going to flunk out of grad school. Being frantically behind is the norm. I'm not even discussing how much reading I need to catch up on this weekend (except to say that it'll start with a book and several essays that were supposed to be read for this week...sigh...))

Anyway -- my tea should be steeped by now, so off I go. Wish me luck!

11:00. Well, I've got a thesis and first paragraph. No real sense of how coherent they are, but it's sufficient for now, I think. Look -- I'm going to inflict them on you. If you notice any gaping holes between now and tomorrow morning, please drop me a line:

"In Benjamin Franklin's autobiography , we see that Franklin divides identity into two aspects -- the public and the private. The public identity is the self that Franklin shows to the world; it is what he uses in order to better persuade others of the validity of his ideas. He does not believe that there is any intrinsic wholeness to that identity, and is willing to modify it freely in order to increase its effectiveness: for example, he deliberately modifies his writing habits, modelling them on the writing of others, in order to create a more effective public self, one that can better inform, please and persuade his listeners. The private identity is the self that Franklin forms by choosing texts to read and individuals to argue with; it is similarly designed to inform, please and persuade, but where the public identity is designed with an external audience in mind, the private audience is designed solely for an audience of one -- Franklin. If Franklin is pleased by that identity, at any point, in any shape, that is sufficient to justify its existence. For Franklin, there is a practical difference in terms of audience between the public and private selves (and thereby in terms of the amount and type of necessary persuasion for those audiences), but both identities are formed in identical manner, through the influence of external signs; there is no intrinsic Franklinian identity, and no ontological difference between the public and private identities."