Facebook Instagram Youtube Twitter Patreon Shopping-bag
Menu
H'lo munchkins. I'm not feeling so good. I got sicker instead of better over the retreat; I slept at least eight hours last night but still woke up so exhausted that it took me twenty minutes and a serious act of will to get out of bed. (I realize that's typical for many people's mornings, but usually I'm a bounce-out-of-bed-caroling-good-morning type). I'm freezing, for no good reason. I'm wearing socks and pyjamas and Jed's soft sweater. I have a hacking cough and a queasy stomach and I am feeling so frayed that I just want to collapse into someone's arms and cry. Nothing's actually wrong -- I think it's just the accumulation of stresses. Papers due this week. Papers due next week. All the energy spent trying to figure out a sane response to last week's events. The frustration of trying to deal with upset, angry people on various mailing lists. Five glasses of wine Friday night, which is too much for the Mary Anne. Lots of energy spent in interacting with many people over the weekend -- and while I don't regret the interactions, I do feel like I used more energy than I reclaimed, during this retreat. Worthwhile long-term, since it's definitely good for the department to engage in this kind of bonding activity, but in the short-term...eep. I feel like a very small, sick, tired critter who wants to crawl into a hole and pull a blanket over her head. But I have work to do...

Enough moaning. I'll tell you a bit about the good parts of the weekend before I start working. 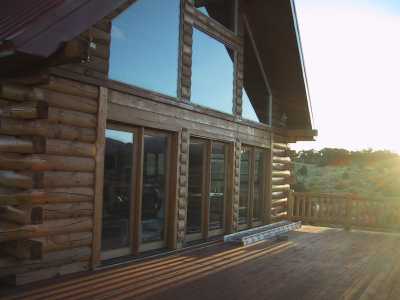 Paul, Heidi, Lisa and I drove four hours down to Torrey, Utah. The drive down was exceedingly pleasant -- we mostly talked writing/editing/department stuff, and despite a long debate between Paul and I on the merits of simultaneous submissions, the company and discussion was so very congenial. Time sped by, and before long, we were arriving in Torrey, a little artist's community right outside Capitol Reef National Park. We were all staying at N.'s husband's family's cabin, an absolutely charming place with tremendous views all around. It was gorgeous.

We took a while settling in, chatting, munching. N. had asked me to bring appetizers, so I had made a couple of different spreads for bread. Tomato-garlic bruschetta, creamed mushrooms, goat cheese with bell peper dressing (to make the recipe a little simpler to deal with, I just mixed the goat cheese in with the bell peppers once they'd cooled). Oh, and devilled eggs. Everyone seemed pretty happy with them, so I was happy. God, I love having an excuse to cook. One of these days, I need to get me a family, so I'm not just dragging my friends over all the time and stuffing them with food...

People arrived bit by bit, in various cars. First N. and Jeff, minutes behind us, then Sarah, Stephanie and Rogelio (all new to the department). Peter came in a separate car -- he's also new. Traci also came separately -- she lives in Provo, so wasn't driving from as far away as the rest of us. For a while, that was all of us...eventually Jenn and David arrived (did I mention they got engaged in the spring? not sure I did...), followed fairly closely by Kate and Eric (whose car had some kind of break-down on the way, but mysteriously arrived anyway. Vapor-lock? The ways of cars are strange to me). By that point, we had already consumed a fair bit of wine and beer and were eating dinner -- salad and some amazing lasagnes that N. had made -- not only were they delectable, but she had made the pasta herself! I was so impressed. I'm made gnocchi, but never regular pasta; I'm not even sure how one does so. I want to learn.

That was all of us, except for Samantha and Steve, who came down the next day (I think Steve had something he needed to do in Salt Lake Friday night). Quite a horde! Oh, and the dogs too. We were visited by a neighbor dog, but Rogelio also brought down his beautiful Percy, and Kate brought Poeia (pronounced Pia :-). We ate and drank and talked and eventually (around 3 for me, though others stayed up later) went to bed. Some slept huddled in sleeping bags on the porch, under a sky filled with just masses of stars -- more than I've ever seen in one place before. Some of us slept inside, in beds and sleeping bags. I had managed to snag a bed, and you would think that I would sleep well, but I'd had just enough wine that I couldn't quite fall asleep -- I spent the night dozing and waking and drinking more water and dozing again. Ah well.

The next morning, we woke slowly. Some people wrote for a bit, while others chatted over coffee and tea and muffins and fruit. Eventually, most people went off for a hike -- this sounded like a lot of fun, but I was just too tired. Plus, I really did want to get some work done. I set up the computer, downloaded the photos I'd taken so far (lots, and Jeff took a bunch too -- I'll spare you most of them, since you don't know the people and they don't know you :-), and fussed with them a bit. I thought about writing for a while; there's an anthology looking for speculative stories set in a bookstore, and I actually have something of an idea and a plot for one. But sadly, I couldn't seem to get it to the writing stage; I wasn't able to come up with any dialogue, which is usually a good sign that the characters aren't really clear enough to me to start writing yet. So I read instead.

I first read a really gorgeous book called Safekeeping, by Abigail Thomas. I would be very happy if I'd written this book. It's a nonfiction book, a memoir of various events in her life, though it does center around her second husband, who had recently died. It sounds like it would be a downer of a book, but it's so not. It's sweet and honest and brave and it somehow just feels clean. I don't know how to explain what I mean by that. It reads as if she knew what she wanted to write about, and just wrote it -- exactly that, no more. M'ris, I thought of you while reading this; I think you might like it quite a bit. Jed and David too. I read this sitting on the porch, tucked into a sunny corner with a few pillows behind me, with a cool desert breeze ruffling the pages. Jenn also stayed behind, and she was alternately reading and writing in her journal near me. We paused and chatted occasionally. So pleasant.

I was starting to get groggy by the end of it, so I had some lunch (leftovers, yum. :-) and actually made myself a cup of coffee (1/4 coffee, 3/4 milk, 1 1/2 spoons sugar). That woke me up enough that I was able to read through four essays -- Saussure and Levi-Strauss. I had read the Saussure last fall, so that was easy, and luckily for me, I did the Levi-Strauss in college, so that was review as well. Pretty straightforward reading when you already understand the concepts, though I remember having a pretty tough time with these the first time through. I am so grateful that things generally get easier the second time around. Can you imagine how difficult life would be otherwise? Yeesh.

After those I finally showered and dressed (I'd been wandering around in pj's), which was just as well, since somewhere in there the rest of them came back from their hike. (They apparently also went swimming in a pool with a waterfall. I was briefly jealous. Ah well.) Everyone settled down to work for a while -- I was still not able to write, so I read another book, Mr. Wilson's Cabinet of Wonder, by Lawrence Weschler, which was charming in an entirely different way from the Thomas. It's more of a biography, and a meditation on museums, with a fair bit of historical stuff thrown in. Fascinating. I need to remember to tell Kira about it. I fell asleep on the couch partway through and slept for an hour or so. Eventually I woke up and finished the book. Then we all went out for dinner at a really spiffy place, Cafe Diablo. Expensive, but absolutely fabulously delicious. (Not much veggie, though -- be warned). If you're down in Southern Utah, I recommend the place highly. It was a little startling finding a fancy gourmet restaurant (the kind that does artistic arrangements of the food on your plate) in the middle of nowhere, but I wasn't about to complain.

Afterwards we came back and built a bonfire in the backyard. There was some drinking, but not nearly as much as the night previous -- many of us had had a bit much that night. We hung out under those incredible stars, circling the fire, talking. It was nice, really nice. There had been so much friendly talking that weekend, and I think it really served its purpose; by the end of it, I felt that I knew a lot of the people better, and that I was really grateful that we had such a nice group of people in the program. I mean -- I knew they were smart and talented, but nice too? How lucky am I?

At one point I was sitting next to David (Jenn's David, who can be quiet), and I leaned over and asked him if he was happy. And he said yes, and that he felt really lucky to be in graduate school, doing what he wanted to do. A lot of people get very frustrated in grad school, with various bureaucratic and other aspects, but he just felt like there were so many people who would give a lot to be able to do what he was doing right then. I agreed. Despite everything -- despite all the frustrations and difficulties and missing Kevin and missing the Bay Area...despite all of that, I really love graduate school. I feel like I'm in the right place at the time. That's a great comfort, to be doing the work you're meant to be doing. By the time the weekend was over, I had figured out what I was probably going to be writing next (influenced by both the books I had read, interestingly), which is definitely progress, if not actual writing. I had slept in my tent, under the stars, and woken up to crisp desert air and bright sunshine. And it's true that I'm not feeling so good, and that makes me a bit whiny, but I feel better just after writing this entry, reminded of all the good things. This sickness too shall pass.

I still miss ocean, but there is something about the desert too -- a great peacefulness, perhaps. I'm glad to be here.