Facebook Instagram Youtube Twitter Patreon Shopping-bag
Menu
Back in the Bay Area; it feels like coming home. Ah well. Two more days here, and then it's back to Salt Lake City. I'm excited about the new semester, and it'll be good to see everyone there again; I've missed people. Hopefully I won't be moping too much.

Had a nice time in L.A. The first couple of days felt a bit odd; it's been a while since Lisette and I spent so much time together. But by the end of it, we were back to where we used to be. She's one of my very few friends who knew me long before Kevin entered my life; it was...grounding, spending time with her. Reminded me of who I used to be in high school, which is part of who I am. I spent an evening and night (until 5 a.m.) playing D&D. Much fun. I watched suspense movies (finally saw The Sixth Sense). It's hard to be broken-hearted when you're terrified -- who knew? I read a lot of Foxtrot and Calvin & Hobbes. I caught a cold and slept a lot. Good visit.

The last night, we had lots of people over for potluck dinner. Some of her friends, a few of mine. I like that photo of Jenn, in part because she's framed with some of Lisette's crystals (I think if you live in L.A. for any length of time, you're required to get some crystals. It's just a rule. Lisette's are very pretty.) Jenn looks like a very idealistic young priestess. If only she were wearing indigo robes... :-) 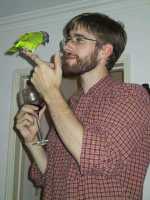 She also brought Leigh and Peter. Leigh has apparently been reading my journal for forever -- since the very early days, off and on. Was much fun meeting her. Peter's her boyfriend; he also gets along well with birds, apparently, and takes lovely photographs. I coaxed him into taking a couple of me. :-)

It was a lovely party, even if we did have to shove people out the door at the end. :-) And we managed to get four journallers into the same room, which pretty much guarantees a good time will be had by all -- or at least by the journallers... 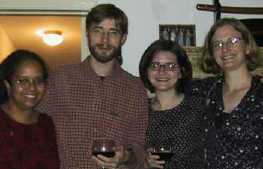