Facebook Instagram Youtube Twitter Patreon Shopping-bag
Menu
Kevin gets back from France tomorrow. Knowing that makes it a little hard to concentrate on anything else. We haven't really been able to talk since he left; he's terrible with e-mail. Some brief notes back and forth. I haven't come up with any miraculous fixes while he was gone, so it doesn't make so much sense to hope that he managed it, but...

Anyway. I don't remember much of Sunday -- I think I played Might and Magic much of the day. Hours disappeared. Somewhere in there I finished the Eager books -- it turned out there was one I hadn't read, which startled me mightily. They were delightful. Oh, now I remember -- in the evening I went into the city and met up with Alex and Yuko and their David. (I would use his last name, or last initial, but I don't know it anymore...) Yuko took us to a great Chinese place, that I think I could find again, but I don't remember its name. Hot and sour soup, salt and papper crab, garlic shrimp, Chinese mushrooms, Peking duck. It was all delicious. Afterwards, we walked to the Italian neighborhood, stopping at City Lights bookstore on the way (where the beatniks hung out -- a great bookstore), and had coffees and steamed milk at Cafe Trieste. Very pleasant.

Yesterday, more computer games. At some point, Susan arrived and dragged me away from the computer. We hung out and chatted and made spring rolls and somewhere in there Lydia and the girls stopped by (Kiera is almost as tall as me now! She's only twelve!) and then Heather came by, and there was much chatting and spring roll eating and tea drinking. When everyone left, I played computer games again. I'm going to swear off for a couple of days, though -- it makes my life disappear in a somewhat alarming way.

Today, I need to run to the bank to close an old safe deposit box, and then M'ris is coming by for lunch, and then she and I are planning to go for a walk, and then this evening at some point Jed will come by and scoop me up and take me back to Mountainview with him. That's the plan.

What I found funny about Todd's long examination of what he dislikes about photos of him, is how much it doesn't apply to me. When I see photos of myself (including the two that are in that essay), pretty much all that I care about is whether I look fat. That's what will make me like or not like a photo. Of the ones there, the one in the blue dress is okay, not great, and the one in the brown dress I actually think is pretty cute now -- but I'm pretty sure I thought I looked fat when I first saw the picture. It's clearly sort of a random perception thing -- when I look at pics of myself from high school, almost all of them look fine, and yet I remember back then thinking I looked awful in all of them. I do seem to take more bad pictures these days than I used to; an indication that I ought to either work out more or be photographed less, I suppose. :-) But mostly, I rely on the kindness of strangers and friends -- if they take awful pictures of me, hopefully they'll check with me before putting them on the web!

That's my default these days, actually -- if a photo is really fabulous and I think the person looks really good in it (like the one of M'ris on our birthday, at the baseball park), then I'll just put it up. Especially if it feels time-sensitive. But if I can, I'll put photos up on a private page first and let people tell me which ones they can live with having on the web. Because even if it looks fine to me, I know that they'll probably have their own little neuroses about weirdo things like their smile, or their profile, or the left side of their face, or stubble. :-) My mom used to tell me that my forehead was too big.

In the end, I try to relax and tell myself that when I'm 80, I'll think all these terrible photos of me look fabulous.

One more quick note -- the recipe for curry buns that Tim likes so much can be found in Charmain Solomon's Complete Asian Cookbook, which I know I've recommended to you before. It's truly a fabulous Asian cookbook. I love it muchly. You can find them in the Sri Lankan section, under snacks, also known as 'mas paan'.

Oh, and the Disch author focus issue of Strange Horizons is up! Stop by, read it, and tell David how much you liked it...he was coordinating this time around. Good stuff! Very entertaining interview.

Oh (yes, another oh) -- one more exciting note: Tangent is now reviewing stories from Strange Horizons on their site. Their annual subscription is $2 (goes up to $5 annually tomorrow, actually), so if you want SH reviews, hot off the presses, now would be a good time to go sign up. You can read them for free on the site, but you have to wait three weeks for them if you're not a subscriber.

That's all for now, I think. 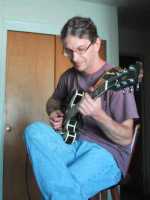 5:20. Well, mopiness off and on today, but I did get some work done despite that, and then had a nice lunch and afternoon chatting with M'ris and David. Include photo-taking, of course. It's a good thing my friends are so tolerant. David's given permission for this one of him -- I haven't asked M'ris about the one below of her, but both David and I think she looks pretty in it, so hopefully she won't object. :-)

I did get mopey again later, but David managed to cheer me up. It's been so lovely being around him these last few weeks -- I can't really tell you. 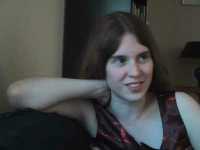