Facebook Instagram Youtube Twitter Patreon Shopping-bag
Menu
Zak has too vivid an imagination. I mean, I suppose M'ris and Susan may have ended up in a great pile of lubricity. It's possible -- I had to leave for my reading a little early, and I don't *know* what happened afterwards. But somehow, I doubt it... 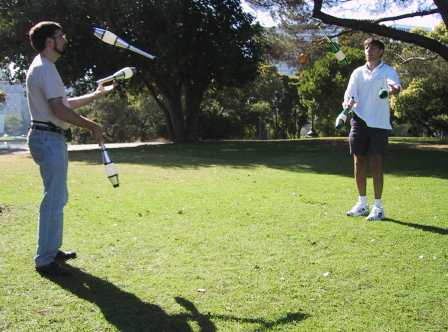 The party was lovely. Pretty much perfect, in fact. There was enough food, and it was all tasty, and it was sunny and beautiful all day. I saw many people I haven't seen in quite a while, and some whom I've seen recently but am always happy to see more. I met some of Susan and M'ris's friends -- and was pleased to see that they got along swell with my friends. There was eating and chatting and lying on blankets and being fed peeled grapes and juggling and laughing and opening presents and just being surrounded by warm friendly peoples. There was a little photo-taking, but not much, because I mostly just wanted to enjoy talking to people. Time slid away so fast. There was sailing; I took Yuko and Alex and their friend David out on the water for an hour, and despite the wind being a bit low, we had a pleasant sunny time. I was told that I make a good captain. :-)

To be honest, I think the best part for me was all the connections between people. If we'd sat down with paper and made a chart of who was dating (or had dated) whom, it would have taken many colored markers and scotch tape and more paper and dotted lines and solid lines and double lines and...I love that. There were several people there who had once been my lovers (I couldn't figure out how to say that -- 'old lovers' sounds like they're old, and only some of them are :-), and 'ex-lovers' isn't nearly a pleasant enough sort of concept for what I actually mean), and most of them were friends with each other, and the ones that weren't yet seemed like they could become so, if given enough time...that's such a good feeling.

I know there are people who marry their high school sweetheart and that's their one and only, and they're happy with it -- I can understand there being something valuable to that kind of relationship. Something almost like the pleasure of a secret, perhaps -- that what there is has been shared with just one, or very few. Like discovering a fabulous little restaurant that no one else knows about, perhaps -- someplace where the cook knows you, and they always make your favorite food. I can understand treasuring that. But me -- I'd rather drag all my friends to the restaurant -- 'look, look at this fabulous place I found! You must all love it just as much as I do!' :-) Heh. It doesn't always work that way, but it can be lots of fun trying. And even if you don't all end up in a great big 'pile of lubricity', as Zak so elegantly put it, maybe you'll all end up friends. The kind of friends who like each other because they like the same sorts of things...or people.

Sitting on the grass, watching Alex and Jed juggling together -- that did good warm fuzzy things to my heart.

The reading went very well -- I ended up reading "Johnny's Story", in part because it was shorter, and in part because it fit my mood better. Most of the stories were way over the top, 'how outrageous can we be?', and I think it was good that I balanced it with a sweeter, mellower piece. People seemed to like it. It was good seeing the Bay Area pervs again, and Carol Queen promised to put me in contact with some Salt Lake pervs...maybe that'll make the next year a little easier to take.

I came back all excited, and it took a little while to calm down. Readings do that to me (not just smut readings :-). But David was still up, so we talked over the party, and the day drew to a calm and peaceful close. It felt like a birthday.

This morning, I played with presents (backed up my Visor with its spiffy new backup module! put more memory in my camera! read The Time Garden!) and edited some photos. I did want to quickly show you what I made Susan, just because they came out better than I'd anticipated. Candle holders from Pier 1, painted with layers of green and copper edging, stems wrapped in copper wire and finished with a ring of little gold and green beads. Very satisfying -- hopefully she'll like them as much as I do :-) 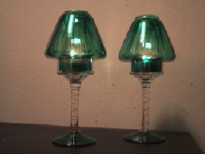