Facebook Instagram Youtube Twitter Patreon Shopping-bag
Menu
Hey, munchkins. I'm writing this in a Borders cafe in downtown Seattle, but it'll be a while before I can upload it. In a few hours, Kirstie will run me to the airport, and then David will meet me in San Jose and take me back to Oakland. 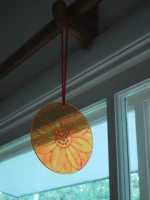 The last couple of days have been fairly full. Sunday, we went shopping for garden stuff and craft supplies. I failed to convince Kirsten that she really wanted some morning glory in her yard; apparently, they tend to consider it a weed around here. Which is just tragic. We spent much of the afternoon on that, and then came home to putter about with craft stuff. The first thing I started was a sunny flower, to hang in her window. She likes yellows and oranges. I'm not thrilled with the result, but it could have been worse. And I learned some things; for example, that if you use paint outliner under stained glass paint, you get a nicely muted effect, much more subtle than what I had been doing. That was pleasing to learn.

While the paint was drying, I spent some time futzing with other bits and bobs that she had around. I made myself a little bracelet, though I'll need to pick up a clasp before it'll actually work properly. What was really fun, though, was working with wire and ribbon and stones. 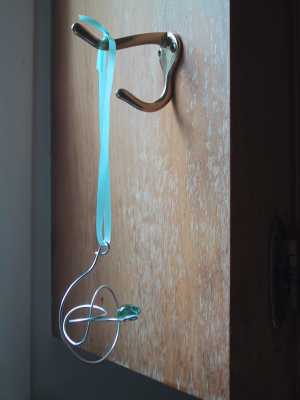 The photo is a bit askew, but the ribbon hangs straight, like a river of shimmery light, broken by occasional translucent stones. It's the only piece that ended up with a title -- "A Circular Library of Stones". Those of you reading Strange Horizons should catch the reference. And the little wire globe -- that's just pretty. I find it very pleasing to my eye. I may make more of them. It's much more fun making crafts with someone, especially when you share supplies, and find yourself using things that it would have never occurred to you to buy. Plus, she had needle-nose pliers and wire clippers, two tools I am lacking. Calm pleasures.

I spent Monday at home, working on BW stuff some, mostly resting. I finished Michelle West's Hunter's Death, the sequel to a book Kirsten talked me into reading some time back. She was right -- it got better. I took a nap in the afternoon, still feeling rather beleagured by my cold. When she came home, I was in a grumpy, mopey, listless mood. She did her best to cheer me up. We made dinner; grilled salmon with mango plum salsa, oven-roasted potatoes. The activity helped rouse me from my sluggishness; afterwards, we read quietly for a while. I went to bed around 11, but had some trouble sleeping; eventually I called Jed and talked to him until sleepiness came back to me.

Tuesday morning I got up with Kirsten and came downtown with her. She went to work, and I went to Borders. Actually, it was early enough that they weren't open yet, so I wandered through downtown for a while, eventually ending up on a park bench opposite the bookstore, plotting a story in my head. A little shivery, but nice too -- it's almost impossible for me to be really bored anymore; there's too many stories wandering about in my head. By the time I got my chai and settled down with laptop in bookstore cafe, I was ready to write, and in the next few hours, managed to finish a draft of a story I'm pretty happy with, "Wild Roses". Sent it out to the readers' list last night. Exorcised a few demons along the way, I suspect. Misery is productive of writing, at least. Whether it's *good* writing, I'll leave for y'all to judge.

I met Kirsten for lunch; we ate leftovers in her cafeteria, which has a lovely view of the city. Then she walked me partway up Pike; when she turned around to go back to work, I continued up, until I reached a gay/lesbian bookstore (whose name I am forgetting). It turned out that they hadn't heard of Aqua Erotica -- I fixed that! Across the street was Toys in Babeland; they were delighted to see me and have me sign books; apparently, AE is their top fiction seller at the moment. :-) Not bad for a book that's almost a year old. I spent a while looking at toys too...

Mostly puttered about in the afternoon, reading this and that. In the evening, we made curry, because Kirsten wanted to have a good stock after I left; she also wanted to watch me cook it. I've talked her into buying the Charmaine Solomon Complete Asian Cookbook; I've just picked a copy up for her, and have spent some time going through and annotating it in pencil. Mostly just saying "this is a great recipe!" We drank some champagne, we talked until bedtime. She gave me comments on my story. We talked about men we knew. We laughed, we cried. Well, I did, anyway. :-) It's been so nice spending time with her again. I feel very lucky that I've had the chance to wander around this summer. She thinks I need to buy a car, so I can wander more freely and frequently. She may be right.

A little work before I go to the airport. I'm somewhat behind on BW stuff; I don't like reading stories when I'm sick and cranky, because I can't give them a fair read. But I'm feeling somewhat better, if a little tired, and by the end of the week, I hope to be thoroughly caught up. That's the plan, at any rate.