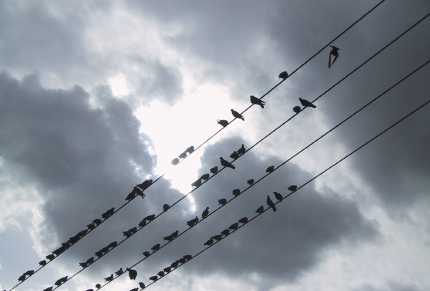 Around 2ish, Karina and I headed downtown, by way of a statue garden. Along the way, we paused to take photos of a LDS chapel -- and then noticed that the telephone wires above the chapel were just covered with little black birds.

Blackbird singing in the dead of night...

They were great. Every once in a while, about a third of them would take off and just swoop around before settling down again. We didn't manage to capture a picture of that, though. That's okay -- I'm pretty happy with this picture. I just wish I knew more about photography. I love taking pictures, but aside from one very basic class in high school (which mostly taught us how to develop film, a skill I hope to never need again), I haven't ever studied photography -- or even how to compose a picture. I am woefully deficient in the visual arts. My aesthetic sense is okay, which means that if I take fifty pictures, I at least have a decent chance of figuring out which ones are awful. Although even there -- when Kirsten was here, she and I took some photos, and I thought it was fascinating the way she could take a photo that I thought was irredeemable, focus on the interesting part, and crop down to it. That was just cool. The ones of my eyes and braid -- she did those. The full originals were scary. :-)

At some point, I'll make time for some classes in this stuff. I'd love to do books that combined photography with writing. (Photography almost feels like cheating; it seems like the only art where you can accidentally get something pretty damn good (if perhaps not absolutely great) -- where's the sweat and toil?) I'm not sure what kind of books; maybe a Sri Lanka travel book? I just like making books, I think. I'd like to take a bookmaking class too, and make beautiful one-of-a-kind books, or lovely limited edition print runs. Ah well. Later...

We eventually made it to Blue Iguana for lunch (close to 4!), and then went to Borders, where I failed dismally at getting my review written. Chris is going to kill me. But Karina and I did talk about it (she read the book earlier this week), so I'm not feeling quite as stalled as I had been. Still hope for finishing it this morning; we'll see. I picked up a few books -- a replacement copy of Pamela Dean's Juniper, Gentian and Rosemary, because I gave my copy to Kirsten when she was here; a copy of Disch's Camp Concentration, because three separate people in three different contexts in the last month have been shocked that I haven't read it, and Molly Gloss's The Dazzle of Day, again on a recommendation. I'll let you know how the last two are; you already know I love Dean. Hung out there until Paul came and picked us up; we grabbed some raw veggies at my place and then headed over to his. There he made yummy fried wontons (stuffed with tofu seasoned with scallions and tamari) -- now I know how! I love learning new cooking techniques. And stir-fried vegetables over rice. We chatted and played a puzzle game whose name I'm forgetting; I discovered that when I'm tired, I suck at waiting to find out the answer -- I must know, immediately. This may be true even when I'm not tired; we'll have to wait to find that out. Really nice evening, as is usual with them.

When we came home (1-ish), we talked for a bit before bed. Her last night; it's weird having her only be here for three weeks. When we were dating, she used to come for three months at a time, her summer vacation (in our winter). The rhythms of the visits were entirely different back then; it's odd how different three days is from three weeks is from three months. Oh well -- one of these we'll have teleportation and all this will be irrelevant.

Okay -- book review, read two stories for class, SH contracts and checks, water the plants. Lots of time to do all that before noon. And somewhere in there, the SH t-shirts will arrive; fingers crossed that they look good! If they do, I'll put a picture up. If they don't, I guess I'll be annoyed. I think it would be really cool to have the six or so SH staff that are going to Potlatch all walking around at the con in their black t-shirts. Maybe we'd look intimidating and cool. Maybe people would want to join our gang. :-)

After noon, classes, then home for dishes and packing, then onto a plane at 7. Jed will meet me in S.F., and we'll go back to his place for dinner. Sounds nice, doesn't it? Sounds lovely.

9:50, Mountain time. Hey, guys. Sleepy baby. I'm on the plane to San Francisco, a little delayed and very tired. I spent a while staring out the window, and started to drift off with my forehead pressed against it; then the captain made an announcement and I woke up enough to listen to it, and the next ten minutes of trying to fall asleep were futile. It's not even a two hour ride; I think I can manage to amuse myself.

I've been reading Carol Emshwiller short stories; they're good, and really unusual. I'm not sure who I can compare her to. I'll let you know my overall impression of the book when I'm done with it, but so far, I'm pretty impressed.

I figured out what it is I like about take-offs. I had actually forgotten that I liked flying, what with all the tiring trips last fall, but I haven't been on a plane in almost two months, and I've found my pleasure in it again. And pleasure is exactly the word I want; I realized that a good take-off is just a little like an orgasm. Really. A slow acceleration, barely perceptible at first, getting faster and faster, more and more intense, until you're actually pressed back in your chair, and then you take off! Okay, it's only a little like an orgasm. But there is something of that same sense of building tension in the muscles, of heaviness of limbs, for me -- if I pay attention. I like it.

I'd really like to go to a space camp some day; be spun around and feel my weight increase (the amusement park rides just aren't the same), see just how my G force I can take...of course, that would just be the first step, preparatory to actually going into space. I used to be terrified, when I was a kid, that I'd turn out to be biologically unfit. I read all these science fiction stories, in which the young space cadets went through all these tests, and there was always at least one (and sometimes, all but one) who couldn't take it, who vomited uncontrollably in zero gee or who had horrible nosebleeds (and ear bleeds, ick) at high gee. And there was no way to know in advance if you were going to be one of those; I was so scared that I'd get to astronaut training camp, go through all the trials, and then find out that my body just couldn't do it. Heh. If I could just go back and tell my seven-year-old self that she had other things to worry about...

Took a break from this to try to write a song; think I've got something. It's called "Always Leaving" -- and what's funny is that it started out in the first line as a song about Karina (who, as you may know, has come to visit us most years for quite a while now...always inevitably leaving again to go home to Australia), but almost immediately morphed into something else entirely, something I can best describe as a certain state of mind. I think this is a better song than the other one would have been. The only thing that worries me now is whether I'll remember the basic melody long enough to get it down somewhere -- Jed has a keyboard, but I have other things I need to do tonight. We've started our descent, so, odd though this sounds, I think I may just wait 'til we land and then call home on my cell phone and sing the chorus (quietly) onto my voicemail. Geeky, but there you are. Technology is meant to make our lives easier, no?

Seat backs up, tray tables up, electronic devices put away -- the captain has spoken, so I'll talk to you later, my dears.