Facebook Instagram Youtube Twitter Patreon Shopping-bag
Menu
Morning. *yawn* Feeling more than a bit groggy this morning. Yesterday was a killer day, reading theory from morn to dinnertime -- then a little tv-watching with Karina -- then writing until bedtime. I's tired. I would have slept longer this morning, but I got a call from a student at Duke; the South Asian student group there is trying to schedule a conference they want me to speak at, and they're having some trouble because of some sort of sporting event...honestly not sure of the details; I told her to e-mail me.

Everything's seeming a bit fuzzy this morning, including the news I was reading about the results of the Florida recounts. But it does seem pretty clear that Gore would have won. Nothing to be done now, really, and while on the one hand it does feel like a moral victory for our side, it's also frustratingly futile as well. Everything Bush does in the next four years will be subject to extra-strong questioning, I think. At least for a while -- maybe four full years is too much to expect. I'm just not politically astute enough to have any clue whether that will be a good thing for the country or not. I wonder what the rest of the world thinks of all this too. Maybe I should go read some foreign newspapers.

I'm feeling a little overwhelmed with work. It's not that Karina's actively stopping me from working; it's that it's so lovely cuddling on the couch with her, or talking for an hour before falling asleep, or chatting in little bits in between reading essays. It's entirely my doing. But the result is that while I'm getting what I need to done, all the hours where I did the not-quite-to-deadline stuff have disappeared. I have one such hour now, and there are so many things that could possibly go in this space, and I can't think which ones I should actually put in it. I probably won't be able to read Heir in an hour, though, so that one is pretty much out. Ditto finishing the history reading.

Chatter chatter chatter. If I chattered less, I might get more done. Still, it's nice taking fifteen minutes to talk to y'all in the morning. It lets me pretend to still be civilized...which is important to me. Little pleasures like this are what keep the whole thing feeling good, keep grad school from turning into a chore that needs to be accomplished. Having some fluidity in the schedule -- the option of watching a little tv with Karina curled up against me, stroking her hair and listening to her chatter (while still trying to follow what's going on on-screen) -- that's lovely. Having this human contact is so good for me; and even though my brain's stress levels are probably high enough with all the unfinished tasks that my neurotransmitters are blinking at me wildly, waking me up an hour before the alarm most days, my body feels a lot better. It needed snuggling. :-) 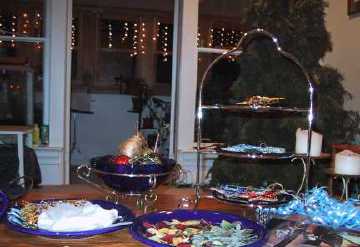 The remnants of last year's celebration linger; lights shine bright at night, and glittering gleaming fragilities of glass and ceramic and shiny paper nestle warm and comfortable in cobalt bowls. One by one they are put away; each day another ornament is wrapped in tissue paper, another bright decoration is taken down from the wall and replaced with one more demure, sedate. They are lovely, but distracting, and their time has passed for now. They are better off safe in boxes. But the passage is slow, savored. The holiday extends four, five, six weeks past its high point. There is a gradual lessening of joy, rather than an abrupt finale. A diminuendo. And perhaps one ornament will be left hanging in the window, one twisted spiral of cobalt blue and gold, one glass fragility, lovely and useless, to serve as a quietly joyful reminder of celebrations past, and celebrations yet to come.