Facebook Instagram Youtube Twitter Patreon Shopping-bag
Menu
Yesterday turned out okay, despite my crankiness. Tech writing went smoothly (though we spent most of the class on introductions, so it would have been kind of difficult for it *not* to go smoothly), and narrative theory was fine. I'm supposed to write up something for Tuesday in that class, somehow explicating Saussure, Barthes, Derrida, Lacan and Benveniste. Meep. He said I could do anything from a purely academic analytical piece to a piece of post-modern fiction -- that sounds well and good, but I'm not sure what a piece of post-modern fiction really looks like. I suspect this may be causing me some stress this weekend.

Canonical perversions went really well; Querelle is certainly an interesting book to talk about, even if some of its contentions about masculinity do distress me. I wonder why it is that when fiction and film examine masculinity these days, they seem to focus on violence? Is that really such an integral part of being male? And why does it bother me so much? I grew up on the image of the hero, after all, and I'm really not a pacifist -- as long as he's defending his family, for example, I have no problem with him blowing away a bunch of bad guys. That's the sort of traditional 'manly' image that I do actually respond to positively; I admit to liking the idea of guys as defenders, strong protectors. Though, of course, I also want the text to acknowledge that the woman could also be blowing away the bad guys, should the need arise. And maybe that's part of it -- if the woman is just as capable, then where's the part that gets defined as solely manly? Does it end up being purely a readier access to violence? I'm just not comfortable with that. Part of me wants to urge writers to work on this -- to say that we need better images of masculinity. And of course there's another part wondering if we really ought to be perpetuating this feminine/masculine dichotomy -- does it really do much good, in the long run? How arbitrary is it, in the end?

Oog. Tough stuff. I'd be interested in hearing what the guys among you have to say on the subject. Is it important to you to think of yourself as 'male'? And which personality traits (or perhaps physical traits, like strength), do you think reinforce your male image?

After class, I ended up spending about an hour and a half copying with Jenn -- it would have been longer without her help. Nuisance. And sometime by Tuesday, I need to go buy some course packets at one place, and some textbooks at another place. I could wish that my professors could somehow consolidate all this into one place for the benefit of those of us without cars. Each of these errands is going to take at least an hour. But I'll read on the bus, so it'll really be fine. I'm just complaining for no real reason.

The rest of yesterday I spent reading fluff, watching tv, chatting a little with Jed, and talking with Ian Hagemann about an upcoming panel at Potlatch. I'm ringleading a diversity panel at Potlatch at the end of February (and if you're in the Bay Area, I'd love to see you there. :-), and it's a bit of a trick to figure out where, in the whole wide question of diversity, I want this question to go. I'm also trying to pull together my panelists, and it's tough 'cause Potlatch only lets people serve on one panel, and some of the people I wanted are already taken. You'll probably be hearing more from me on this.

At any rate -- I have a whole pile of little things to get done this morning, and then I'm going to go meet Jenn at a cafe and write, so I'd best get to it. Happy Friday, guys.

2:15. Today's not turning out quite as I expected. No sign of Jenn (she's sometimes a little...umm...flaky's not really quite the right word, because she's very responsible and capable and all that. I really don't know what is the right word, but sometimes things we plan on happening don't happen), and while I got a lot of computer work done I needed to do, I haven't done much else, and certainly not the writing I had sort of planned to do. I'm feeling blue today; sad and mopey and having a hard time getting up the energy to do much. I have a fair pile of reading to do, so I think I'll try to sit and do that; perhaps it will help. What I'd really like to do is sit with a friend on a couch and cuddle and drink hot chocolate, but that is sadly not an option.

10:45. I'm feeling much much better. Jenn called, and of course the thing that had come up was a very reasonable thing to come up. That's why she's not actually a flake -- she always has a very good reason when she misses something. She's just very busy. We're going to take another stab at it tomorrow.

I like to think I might have gotten some work done today if I hadn't called Kevin around 2:30. But it's just as well I did, since we talked until 9:30, and I felt a *lot* better by the time I got off the phone. We've both been very busy this past week, and so I haven't done more than check in with him briefly since last week, and what with all the beginning-of-school-craziness, graduate-student-anxiety, confusion-as-to-whether-Karina-will-be-able-to-come-visit, trying-to-schedule-a-little-time-to-see-each-other-in-the-next-two-months-in-bet ween-conferences,-friends-visiting,-and-job-presentations-for-him, it's been more than a little difficult to find time for a proper phone call. Which means that when we do finally have time to talk to each other, everything spills out, and it takes a while to sort through the muddle.

I'm not even sure what we talked about. Somewhere in there was almost a fight about whether it was good enough just to be ethical, or whether it was better to be actively honorable as well. We ended up with him acknowledging that there was something to be said for the honorable impulse, and with my acknowledging that the honorable impulse was generally the wrong thing to do in the situation if it wasn't agreeing with the ethical analysis, and somehow we managed to come to a peaceful resting place, but it got exceedingly heated along the way. I'm honestly not sure how I can get so incredibly upset with him over philosophical disagreements that wouldn't bother me at all in a classroom. I suspect it's because in a classroom, I'm generally quite sure I'm right, whereas when I'm arguing with him, I generally suspect I'm wrong and boy, do I not want to admit it. Luckily, this time I didn't have to. Quite.

Not everything that's been bothering me this week is resolved, but it's so much nicer having talked it all out with him. I feel like I can cope again. And I'm not going to let that narrative theory assignment defeat me, nope nope. G'night, munchkins. Hopefully, I'll get more work done tomorrow. 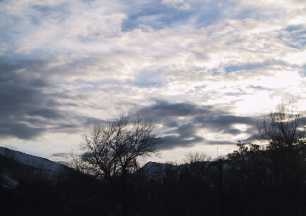 Light suffuses the sky, glowing
behind thin clouds; the world
is luminescent in the early hours,
and the air above the mountains
is clean, every tree, every branch
sharply outlined and defined; it is easy
to make grand pronouncements, believe
in absolutes, in this cutting light. 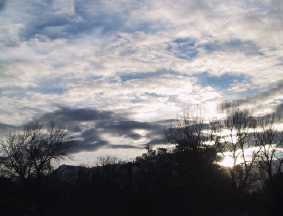