Facebook Instagram Youtube Twitter Patreon Shopping-bag
Menu
Gods, I'm cranky! I set my alarm for 7:00, figuring I'd get about six and a half hours of sleep -- it's now 5:30 and I'm wide awake and I feel cruddy and I can't sleep anymore; I can't even lie down. My body does this weird thing sometimes when I'm sleeping where sheets and such around it feel incredibly uncomfortable and constrictive, to the point where I just can't stand it -- the feeling is not unlike miniscule ants skittering across my skin. Clothing has much the same effect. And it's too cold to sleep naked right now, which sometimes works. So I'm up. And actually still feeling that weird skin thing, but at least I can distract myself a little with typing; eventually it will go away but it's driving me nuts now. I'm not exactly tired -- I'll probably be okay today, since I had that little nap yesterday, but neither do I feel well rested. Argh.

6:15. Okay, writing in the darn image notebook made me feel better. I suppose that's one point in its favor.

8:30. Finished Querelle, thank the gods. I'm okay with discussing it, as long as I don't have to read any more of it. Really not my kind of book, for a variety of reasons. Showered. I feel somewhat better, though still a little cranky. I didn't finish that history book last night, of course -- I can get another half hour of it read before I head in to campus, which is not going to be quite as impressive as I'd hoped, but such is life. I'm sure he'll be fine with my finishing it for our next meeting.

I'm actually itching to write; the assignment for next workshop is to do what she calls a 'split personality' story, one in which you switch POV. I've done a fair bit of that kind of thing, but I had an idea while she was talking for one that could potentially work really well. We'll see if my execution lives up to my imagination -- and probably won't see until tomorrow, though it's possible that I'll get to it this evening. I don't want to mangle it through tiredness, though, so I may just rest this evening and go to a cafe and write all day tomorrow. That sounds like a really attractive option. I want it to be tomorrow now. 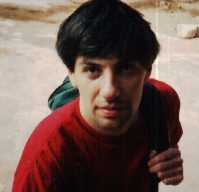 When I knew him, he always wore jeans and a t-shirt. His features were so strong, and his body so long and slender, that he looked awkward, uncomfortable in his clothes. Bones jutted out at odd angles, and his face seemed too large for the rest of his body.

Naked wasn't much better, to be honest -- the limbs still long, the bones even more protruding. And he seemed to grow thinner every year, which only reinforced the sharp prominences of cheekbones and chin.

I first saw him in a suit at his dissertation defense. The lines of the suit draped elegantly over his too-long-limbs, and what had seemed overbearing in a t-shirt was transmuted into power. He took my breath away.

He wore suits for a few years on Wall Street, wore them to work every day. Working with millions of dollars daily added to his self-confidence, and to that look of controlled power. He was still too thin, and always looked hungry -- but in the suits, it looked good.

Wall Street decided some months ago that suits were no longer mandatory; they hang neglected in his closet now.

While I am happy for his increased comfort, it does seem a shame.