It looks like a pretty nice day ahead of me. I have two main tasks: 1) a first draft of my post-colonial paper, and 2) making cookies to take to the last day of classes tomorrow (and since my kitchen didn't magically get clean last night, cleaning the kitchen is a necessary precursor to making cookies). I've got a load of dishes going in the dishwasher; I've checked my e-mail and made some tea. I'm feeling rather peaceful at the moment. That McKennitt Book of Secrets CD is very quieting.

Plans are proceeding for various bits and bobs of my life. You may have noticed that we have a new little ad up at SH for Electric Story, Bob's e-book site. We're trading ads with him this month; in January we'll be trading with Dark Planet, Lucy Snyder's site. It's interesting seeing how that sort of thing affects traffic. Last Monday was our highest day ever, which was really nice -- though we're still not even at a tenth of CS's volume. :-) One of the recent comments in the SH feedback section was a request for more humor and more sex. I have a feeling Jed would have something to say to me if I told him to start taking more smut stories for SH. We'll just have to rely on building traffic through other means -- very shortly we should have an ad out in Asimov's and Analog. I'm very curious to see how a print ad translates to web traffic. Both of those magazines have quite a large readership, but I don't know how many people are likely to put the magazine down, run over to their computer, and pull up SH. Whereas if we run an ad with Electric Story, when they see it, all they have to do is click. Same medium -- which I suspect will make a huge difference. We'll see. What's puzzling me more is thinking about where else on the web would be good advertising for SH, aside from other spec fic zines. Any thoughts? Would Wired be a good place for us? Susannah recently gave CS a nice boost by writing a piece for Salon's 'Mothers Who Think' section, but I can't really think where Salon would want a piece from me related to spec fic. A bit baffled, I'm afraid. The A/A ad cost SH close to $800. I'd rather donate a little of my time writing an article than spend more of that kind of money...even if it's not actually my money, it makes me feel itchy.

Other conversations have been going on about ICFA (that academic conference in FL in March). It looks like in addition to whatever I present on electronic publishing, I'll be on a smut panel too. Should be fun -- a bunch of us will do a series of short readings from some of our favorite smut. I think I'll take along some of Nalo's stuff and some of Cecilia's books. Then the following day, there'll be a discussion group for those interested in talking about smut. Fun stuff. :-) I'm a little concerned about the cost of this conference -- my department pays for airfare, but not for the hotel, which is $80/night. I'm sharing with someone, so it'll be half that, but it turns out that it's a long conference -- Wed-Mon (well, Sun, but if I want to visit the Everglades on Sun, I need to stay through Mon, and it would be a shame to go to Florida and not visit the Everglades, don't you think?). It's not clear yet whether I can arrive Wed morning or need to be there Tues night. If Tues night, that's six nights -- $240. Meep. It's tax-deductible, of course, but still. Plus food too. Maybe I'll pack a bunch of curry buns to take with me...great snack food and they keep for at least a few days unrefrigerated. Money money money -- eep. Is okay, though. I'll budget for it, and it'll be fine. If I get short, I can always sell my body on the street... :-)

I got offered a job a few days ago -- cooking! Is that odd, or what? I did a little catering back in college, making Indian food for parties. Catering is a lot of work, even if you have people chopping and stirring for you. A dinner for forty is just exhausting. This would be a different sort of thing, though -- one of the professors might be interested in having me make vegetarian dinners for her and her sweetie three nights a week. My first thought was that I didn't have time. But my second thought was that I could probably pretty easily do it on the weekend, and make enough of each dish to feed me too. Then a) I'd have some ready-made dinners during the week when I'm too tired to cook, which would save me buying expensive food at Cucina or eating ramen, and b) I'd probably eat more vegetables, which would be good for me. :-) So I told her to tell me more; we still need to figure out whether the logistics are feasible. But it's definitely a thought. And it was nice that she liked my trifle so much that she got enthusiastic about having me cook for her. 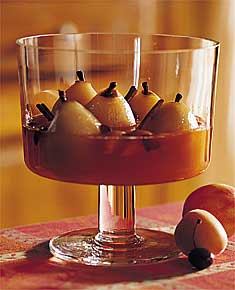 Want to impress your family this Christmas? First, get a trifle dish (though a large glass bowl will do, a trifle dish is so impressive, and makes a lovely fruit salad dish at other times of the year -- the one pictured is from Crate and Barrel's website), and then make this Easy Raspberry Trifle. If you haven't made trifle before, don't be intimidated by how may steps it has -- it's very simple, if you just go step by step. Read the recipe in advance, and don't stint on the cream sherry (although don't soak the dish in it either). Yum yum.

(this image is not trifle. this is a trifle dish, with poached pears, I believe. Would be good over ice cream. trifle is angel food cake and rich custard and fruit and jam and sherry and fresh whipped cream, decorated on top with sliced almonds and pomegranate seeds -- at least when I make it)

I suspect it's time to put another load in the dishwasher. Until later, m'dears...