Feeling a little overwhelmed at the moment, I think because my ADD meds (AND my synthroid) ran out a few days ago, and my doctor has been slow about approving the prescription. If it’s not approved by lunchtime today, I’m going to call the office and see if I can hurry her along.

I can *manage* without Vyvanse, but my stress levels go way up, I can feel the tension tight in my shoulders, I get crabbier with the people around me, and I have real difficulty focusing on tasks.

Yesterday, I did some work in the morning and got through my teaching, but it was really draining to stay focused that long without the meds to help, and by 4 p.m., I was just done.

I did come down at 6 and manage to cook the family dinner; I tried the Costco frozen bul kalbi (Korean seasoned ribs) for the first time, which turned out to be a tasty option for a 20-minute weeknight dinner (with thawing of frozen chopped spinach and bul kalbi in advance):

I approve — the ribs are kind of rich and fatty, so not something we’d want every night, but nice once in a while. I did wish I’d had some cucumber or carrots on hand, so I could start by making a quick pickle, as the plate really wanted a bit of tang to balance it. Next time. That might make it a 25-30-minute dinner, but a nicely balanced one. Kevin and Kavi both really liked the ribs, as expected.

Anand stuck to the pierogi which I also made (add frozen pierogi to pan with butter, sauté about 15 minutes until golden, serve with sour cream for thems that want it), and happily devoured many. I was in a mood to clean out the freezer yesterday, clearly, so we had a Korean + Polish meal.

Oh, the strike is over, yay! — the grad students won much of what they were bargaining for, and I’m happy for them. They didn’t get everything, of course, but that’s to be expected — it’s a negotiation, and generally if both sides don’t get everything they wanted, that’s the kind of compromise you’re expecting.

They definitely walked away with some solid gains, so hooray unions, hooray solidarity, hooray our grad students making livable wages and having some protections in place against harassment, etc. I really like being able to walk into campus and look our grad students in the eye, knowing they have decent conditions to work under. Let’s hope I can help manage something similarly decent with the faculty negotiation at OPRF, from the other side of the table. (I’m not one of the actual board negotiators this time around, which is probably just as well, as it’s going to be difficult enough navigating this as is. But I’ll give input and vote on the final proposal.)

I haven’t firmed up the plan for today yet, mostly because I’m having such a hard time concentrating, but I do need to figure out if the Serendib team is coming over to work at the house today — I think yes.

We’re still masking when we’re working together indoors, and it’s still a bit of a balancing question whether we get enough value from being in-person to outweigh the mild risk and the trouble of making people commute in, but once a week, it really does seem to help. When we miss a week or two due to my travel, etc., I feel like we start losing track of tasks, things start unravelling a bit, and then it takes effort to ravel them up again. Not efficient.

(Side note: I was talking to Roshani on the phone and we were talking about how we’ve both gotten somewhat mask-averse after two years of this, even though we’ll suck it up and wear them anyway when it seems wise, and Anand overheard, and said: “I wonder whether any schools responded to the state going mask-optional by saying, “We’re now going to make KN-95s part of our dress code!” I hope they did!” I don’t think any did, but as you can see, Anand is still firmly in favor of masking. Both he and Kavi are still choosing to mask at school, which I think is wise, since there are so many kids at their schools, in such close quarters. Roshani is seeing a big uptick as a pediatrician in kids with COVID (also RSV, also flu), which surprises none of us. Not a really worrying uptick, but still.)

So I think the team will come over (I have to check the Slack next and see if anyone said they couldn’t make it):

• Ethan will likely be set to making dragonfruit chocolates and passionfruit marshmallows (to have treats out at the in-person sales for nibbling, and for purchase)

• I’d like to go through and get a better sense of our inventory of soaps and jewelry, as we have three in-person sale events coming up in May

• I’d like to really plan out which of the items I make pair with which books; we’re trying to refocus a little so it’s clear that what we mostly are at Serendib House is a press, and everything else (food items, fabric items, jewelry, cards) is in support of the books and writing; I think that’ll help us get our identity and branding clearer

• speaking of which, I have e-mail to deal with regarding the in-person events, right. Must remember to do that next

• I also need to revisit the thread where people gave suggestions for marketing help, thank you to everyone who contributed to that!

I think mostly I’ll be working on sewing and design otherwise today — I’d like to try to make an actual pattern out of my fairies and snowdrops, and design a tea towel with my snowdrop poem and those motifs. I also have the proofs ready for the darker colorway of snowdrops, and the tiny pastel colorway, and they look good, so I’ve approved them for purchase over at Spoonflower. I really like the white on dark green — I think I might want to try sewing myself a garden apron with that colorway.

The tiny pastels don’t do as much for me as I thought they would, but they might be nice in chiffon on spring scarves. Cute for swaddling blankets, perhaps, or a child’s top or dress?

I recently learned that snowdrops are also used to symbolize miscarriage, which makes sense — they are beautiful and ephemeral.

• I want to do a garden log post (probably about resuscitating the very sad succulents in my office), and
• I want to make some more edits to the cancer memoir, which I’m hoping to have done by the end of next week (when the semester ends), and
• I have a story due to my workshop tomorrow, which means I ought to actually finish drafting it (that probably won’t happen today, maybe tomorrow), and
• I really have to make some phone calls to various medical and house repair people, and
• I have to revise the SLF Kickstarter description and schedule May panels, and oh…

…I want my ADD meds, dammit. Guess I will resort to to-do lists in the meantime. They help, just not as much. 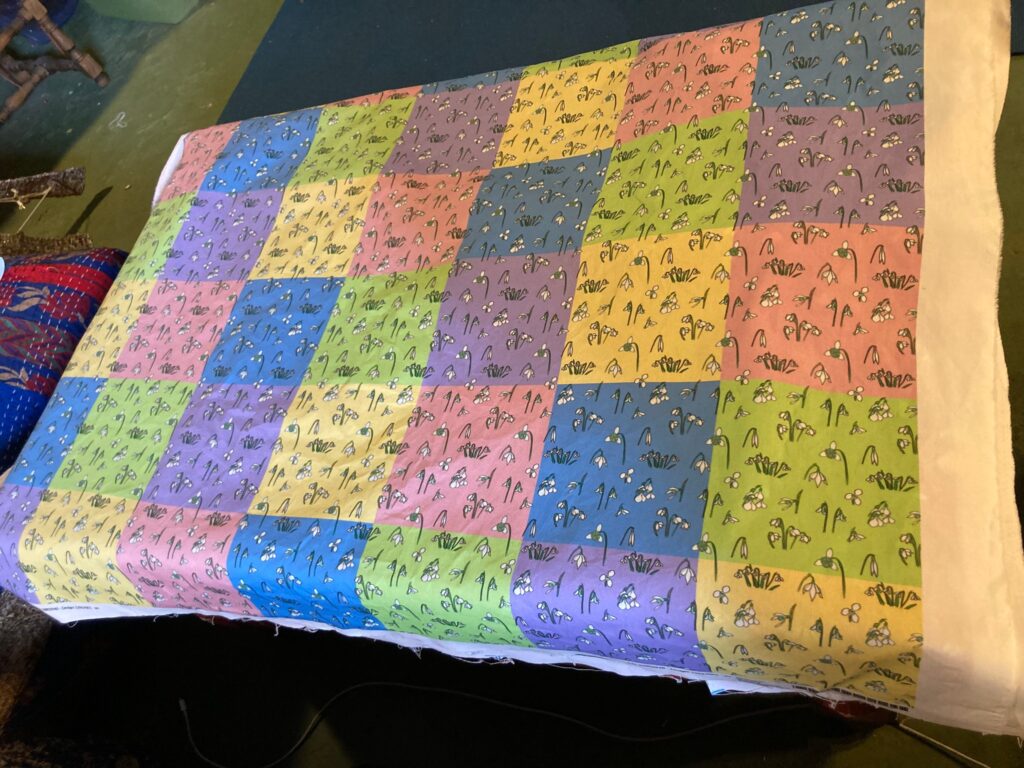