Episode 37983 of How Mary Anne Learned to Admit She Needed Help: So You Want to Start a Podcast?

I’m picking up the story of hiring help (see comments for link to previous posts) with the decision, early in the pandemic, to start a podcast.

MOHANRAJ AND ROSENBAUM ARE HUMANS:

I’d been kicking around the idea for a while, even though I didn’t actually listen to podcasts at that point, mostly because Benjamin Rosenbaum and I tend to have these intense, focused conversations about art and life and story and parenting and such on our drives up to WisCon, sometimes accompanied by Jed Hartman or Alex Gurevich, and those conversations seemed like they’d make a good podcast.

But even though I’d done the basic research and figured out how to use LibSyn to distribute it, recording just one podcast had made it clear to me that a) I didn’t actually enjoy video / audio editing AT ALL (I don’t have the patience for it), and b) said editing, done right, would take up at least as much time as actually recording the podcast, and probably more. So if I were going to do this, I’d need to hire help.

Now, this is around the time I also had realized that I really needed help with the SLF (Speculative Literature Foundation), my non-profit. We’d gotten along in a low-key kind of mode for many years, giving out grants to writers, relying entirely on volunteer labor, but we were clearly hitting our limits on that. It was getting harder and harder to find reliable volunteers, and managing volunteers also takes time, time that I didn’t really have to spare at this stage in my life. So I decided we should at least spend a little money on getting some paid help.

Where would that money come from? Well, the grants we gave out, we usually had donors who were putting up the funds, so I decided it was not unreasonable to factor in 10% for administrative overhead. So if someone wanted to sponsor a $1000 grant with us, we’d ask for an $1100 donation, and that would then cover at least a few hours of someone’s work administering the grant. We also offer memberships, and people can generally donate to us at any time, so there’s a trickle of money coming in that way too.

We’d still need a LOT of volunteer labor — our jurors volunteer their time, and it’s only recently that we’ve even been able to offer them a $25 honorarium in thanks. We also have a volunteer transcriptionist corps, helping to make our interviews accessible. But starting to acknowledge that we needed to pay for at least some staffing, was a step in the right direction, towards making sure we had the institutional capacity to make our programs sustainable in the long-term.

So we hired Karen to put in some hours on administering it all, and Carly to work on development, applying for grants (she got us our first grant very quickly, which incidentally paid for the time she put into it — good grantwriters will generally pay for themselves quickly).

We also hired a bookkeeper so that I wasn’t trying to keep track of it all mostly in my head, and also so we’d have nice clean records to include in grant applications. It took a little while to get our finances in order, and to be honest, we still should go back before 2018 and clean up all those SLF records too, but we now have at least three solid years of readable financials, so that’s a huge improvement.

I want to emphasize the worth of a good bookkeeper here, because we had her working for Serendib Press too, and I can’t tell you what a weight it was off my mind. I *can* read spreadsheets and make sense of financial statements, and I can certainly balance a checkbook, which is most of what a tiny business needs initially.

But I have a lot of unreasonable anxiety around financial matters (mostly, I think, due to the period in my 20s when I was horribly in debt and didn’t know how I’d get out of it — I clawed my way out eventually, but after a decade of stress that clearly left its mark). I often found myself (and still do sometimes, though it’s better) just avoiding dealing with anything financial, which meant checks got delayed and it was just bad. So hiring a bookkeeper was basically worth its weight in gold, in terms of reducing mental strain. If I don’t have to think about the money on a daily basis, I am MUCH happier.

So when you’re deciding on whether to hire help, think not just about how much time and/or physical effort a task takes, but also how much mental effort it takes. How much of a relief will it be to have that off your plate? If I had to get rid of all my staff (miserable thought, gah!), I can tell you that the bookkeeper would be the very last to go. (She also is very few hours / month; she just whizzes through the work. Margaret Treanor Frey, incidentally my college roommate, is our current bookkeeper for both orgs.)

As a side note to students and people looking for part-time work or potential new careers, if you have facility with numbers and are meticulous, I have the impression that the world is always in need of good bookkepers. Also, if you’re willing to ask people for money and fill out grant applications, development work is well-paying and also generally in high demand.

DO YOU NEED AN INTERN?

Anyway, back to the general staffing. We had three people helping with general SLF stuff, and we thought that we were in good enough shape that we could manage supervising some interns. That’s easy to set up through my university English department, and very quickly, we had three interns signed up for spring semester — Emmanuel, Darius and a third young woman. Sadly, the third didn’t really work out; she had a long commute to get out to Oak Park, where we were having weekly meetings at my house, and I think her interests were really elsewhere, so her participation dropped off over time. But Emmanuel and Darius were terrific.

The way I try to manage interns, when possible, is to rotate them between tasks every two weeks or so. My primary goal is to give them a good range of work experience, so they can start figuring out what they might want to do after the internship. I can’t remember everything we had them work on, but grantwriting and social media were certainly two aspects. (E & D, if you want to chime in on comments here, do feel free.)

As we went on, it became clear that Emmanuel had a flair for social media and marketing, and that Darius was really interested in the more technical work, such as audio / video editing. Neither one knew much of anything professionally about these things, having little to no prior experience, of course, but that’s okay — neither did I.

The SLF internship is unpaid currently, which I’m not happy about — we just don’t have the money, though. In theory, students at UIC can apply for some funds through the Flames program there, but it’s a new program and they’re still working out the kinks in rollout. So while I’d like to have more interns this summer or fall, I’m hoping to prioritize paying them SOMETHING if at all possible. But we have to get the regular staffing solidified first. More on that to come. In the meantime, they do get course credit (they do the internship concurrently with an internship course through the department), so that’s something.

When the internship ended, I ended up hiring them both part-time, to put in some hours at the SLF, and some hours at Serendib House (which we weren’t calling it at that point, but basically at my small press, writing business, etc. and so on, helping to get the indie-published cookbook out, etc.).

They’re still with me, and they’re fabulous. Right now, I’m trying very hard to get Darius at least half-time hours at the SLF; he’s our Managing Director, and does a great job helping the trains run on time. I’ll talk about that more soon. I still need to figure out the right title for Emmanuel, and would welcome advice on that — if he’s overseeing Social Media, Marketing, PR, and Outreach, what would be the right title for that? I want to be sure that if he does leave us (sob!), he’s well-positioned for the job market more broadly.

Darius was thankfully eager to take on editing the podcast, and has become our producer there as well. It’s been a learning experience for him, but also for me and Ben, as we figure this out. Early episodes of the podcast, the sound wasn’t so great, because we hadn’t figured out how important that was, and Darius didn’t yet have the tech skills to help with that (or the confidence to insist I get a better mic). But we got better.

So here’s another thing to think about — if you’re deciding between hiring an eager & bright young person vs. someone more experienced, you may save some money on the young person, but you do need to factor in that they’ll need some time (ideally on the clock) for them to learn how to do the job well. Can your business handle looking a little less professional initially? Sometimes the answer is yes, sometimes no, so you need to know your own needs there.

I try to encourage my staff to spend time learning — if they want to watch a YouTube tutorial on how to use HootSuite during ‘work hours’ for example, that’s fine with me. Generally, I think investing in learning time pays off big dividends down the road — but you know, my believing that is probably not a surprise to you folks, given that I’m a teacher by profession.

Coming up next: “Will you ever make a profit, Mary Anne?”

(Random photo of my house decor for the holidays. I think I want to switch out those blue meteor lights for white ones next year, and add more of them. But I thought this was a good photo for symbolizing what it was like bringing in all this help — little lights in the darkness.) 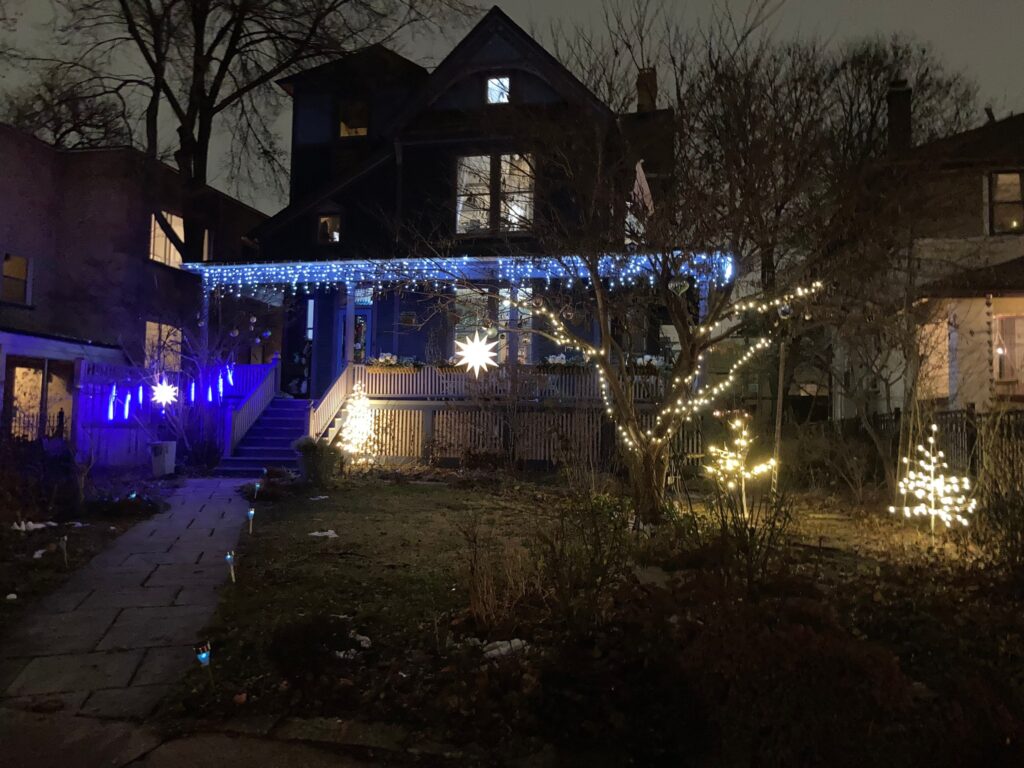