. I was supposed to fly home today, arrive by midday. Instead, I got a message on Saturday that my flights had been cancelled due to COVID staffing issues.

Not a big deal — they’d rescheduled me on a flight out of Albuquerque (instead of Santa Fe, so an hour away), and it’d mean several more hours in transit (5 hour layover in Denver) and getting in after midnight, but Kevin was coping okay with the kids, so a little tedious, but not so bad.

THEN, I got to Albuquerque this morning (catching a pleasant ride with Alex and Susan, who were flying out of there to San Francisco), to find that the computer had somehow glitched, and United only had a record of the second leg of my flight, the Denver-to-Chicago leg. No seats for me on a flight out of Albuquerque, and in fact, these airports are so small, that there were no seats available out of any airline in Santa Fe or Albuquerque for the rest of the day. Eep.

I asked, rather pathetically, if I could possibly go home on Monday, and maybe get a hotel voucher for the night, and the ticket agent said I’d have to go back to Santa Fe, since my original ticket was out of there, and do it from there. Or do it over the phone, that he didn’t have the authority. Eep. I tried calling United, but when the recording said it’d be 45 minutes before I got to the head of the call queue, I went back to talk to the ticket agent again.

He reiterated his inability to do anything, and I, feeling a little like a privileged goober, asked if he had a supervisor who might be able to help. Not to get him in trouble, but just because I knew someone a level up might have a bit more authority to work with.

The woman at the counter next to his turned out to be the supervisor, and when she finished with her current customer and turned to me, she turned out to be really nice and helpful. She figured out what was going on, “Wow, they really messed up your reservation, didn’t they?” Yes, yes they did. It turned out that SHE didn’t have the authority to make the changes either, but that she could call their United help desk, and that it should then be really easy.

“It does depend — sometimes they’re really sharp and just say no and hang up.” Eep.

But the woman she talked to was very nice and helpful (“Wow, they made SO MANY changes to her reservation!”), and thirty minutes later, I was rebooked onto a direct flight for tomorrow from Albuquerque to Chicago, had a hotel voucher for the airport Marriott (not fancy, but the bed is comfortable, which is really all I needed), and I even got three meal vouchers for $10 each (only redeemable at airport restaurants, so not sure I’ll get a chance to use them, but hey, appreciate the effort — maybe lunch before my flight tomorrow, and the hotel comes with a hot breakfast).

All in all, could’ve been much worse. The most frustrating part is that I’ll be on a plane during my first day of classes tomorrow — we’re remote, and I suppose in theory I could try to pay for WiFi and Zoom from the plane, but plane WiFi has proved extremely unreliable. I think it makes more sense to do an asynchronous class tomorrow — record video for them, get them set up on Slack and with some readings, and then we’ll Zoom on Wednesday.

A little chaotic, not the ideal start to the semester, but flight crews getting COVID is really beyond my power to control. I *tried* to make sure I’d get home in good time, but I think I also underestimated how small Santa Fe and Albuquerque airports are; my expectations have been set by decades of primarily using ORD and SFO.

It’ll be fine. I’ve now had an adequate dinner from the nearby Appleby’s (seriously oversalted, and their idea of ‘Cajun’ is a little appalling, but the mashed potatoes were good), and I’m going to try to work for a few more hours tonight before bed. Trip photos to post, and maybe I’ll actually start getting into that novel a bit…

Lessons from the road:

1) Sometimes asking for the supervisor is absolutely the right thing to do, and can even take the pressure off the poor employee who would like to help you and hasn’t been given the authority to do so.

2) Being super-polite, slightly pathetic, and very grateful is good for motivating people to try to help you! 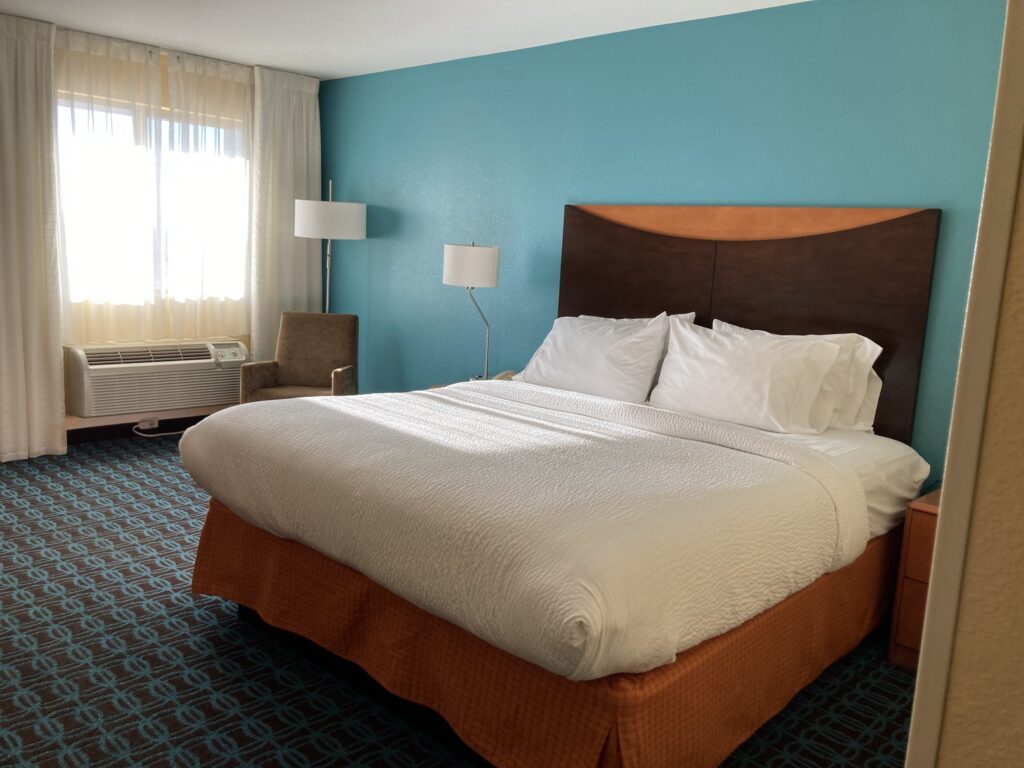