So, I have a winter project to turn our bedroom into Cair Paravel. I mean, not really, but something vaguely reminiscent of castles and Narnia and starry woods.

To that end, one difficulty is that I can’t sleep without a fan going, pretty much, and the room isn’t that big, so a ceiling fan really does help keeping it less cluttered. We have a ceiling fan, but it’s not very high-powered, and I end up having to use a second fan a lot, esp. in the summer. So I’d like to replace the ceiling fan.

I would ALSO like to have some light in the ceiling fan — the current one doesn’t have any lights, and the children regularly comment on how dark the room is. We mostly use the room for sleeping and watching TV, so it’s not SUCH a big deal that it’s pretty dark generally, but it’d be nice to have the option to have ceiling light when we want it.

The problem is that it is very difficult to find attractive ceiling fans with lights. I don’t know why, but it is just hard, unless you want to spend thousands of dollars, which I’d rather not, thanks.

AND I’m not at all sure I can find one that looks vaguely medieval-ish. I mean, I may be chasing a unicorn here, I know. But if you are bored and wanting to browse the internet and drop suggestions for:

I would appreciate any suggestions dropped in comments. Thanks!

Fan-light pictured is appropriate, but is also $1200. Sigh. 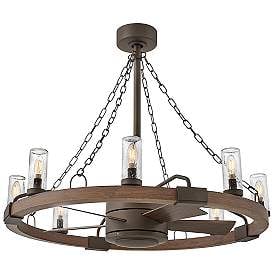