I’m a little groggy today — after the board meeting, it took me a while to wind down, so I didn’t get to bed until after close to 1, and then this morning, an INCREDIBLY LOUD RACKET came from the street at around 7 a.m. I still don’t know what it was, some kind of construction that went on for at least half an hour — even after we closed the bedroom windows, it was still REALLY LOUD. Neighbors, any clue what was up?

Taking it a little easy this morning — I have meetings upcoming at 11 (SLF) and 12 (comic), and then hoping to write this afternoon. For now, I’m alternating sitting in my shed watching Veronica Mars (I saw an episode or two the first time around, but never actually watched the show through) and gardening.

So far today, I’ve dug up and moved a sweet autumn clematis that I had planted smack in the middle of this bed, which is ridiculous, because it needs the fence to climb on, I don’t know what I was thinking. I had it on a little 3′ trellis which it had completely overwhelmed. So I disentangled it from the trellis, and by disentangled, I mean that I hacked it away as needed.

I had to cut off half the vines, but I think it’s such a tough plant it’s probably going to be fine regardless; sweet autumn clematis is a bit of a monster. I’ve now replanted it on the far side of the greenhouse, which is fairly deep shade, but there are some tendrils still long enough to reach the top of the fence, so I think if I tie them up, they’ll likely gather enough sun to keep the creature alive — we’ll see. It’ll be an interesting experiment.

Other than that, spread another bag of mulch, neatening up the area. Only 30 or so bags of mulch to go. I really do like the sort of meditative aspect of doing this one bag at a time, and using this process as an opportunity to reconsider every square foot of the garden as I go. I should plant some shade lovers around the base of that pear tree. Hmm…I think I’ll move the giant hosta that’s not really visible behind the clematis.

Clematis Niobe is starting up (I need to go tie up some of the vines so they reach higher on the trellis). Pretty pretty. I’d love to pair it with a white rose on the same trellis, but that spot really is somewhat shady — any shade-tolerant climbing white roses you’d recommend? I’m thinking Iceberg Climber. 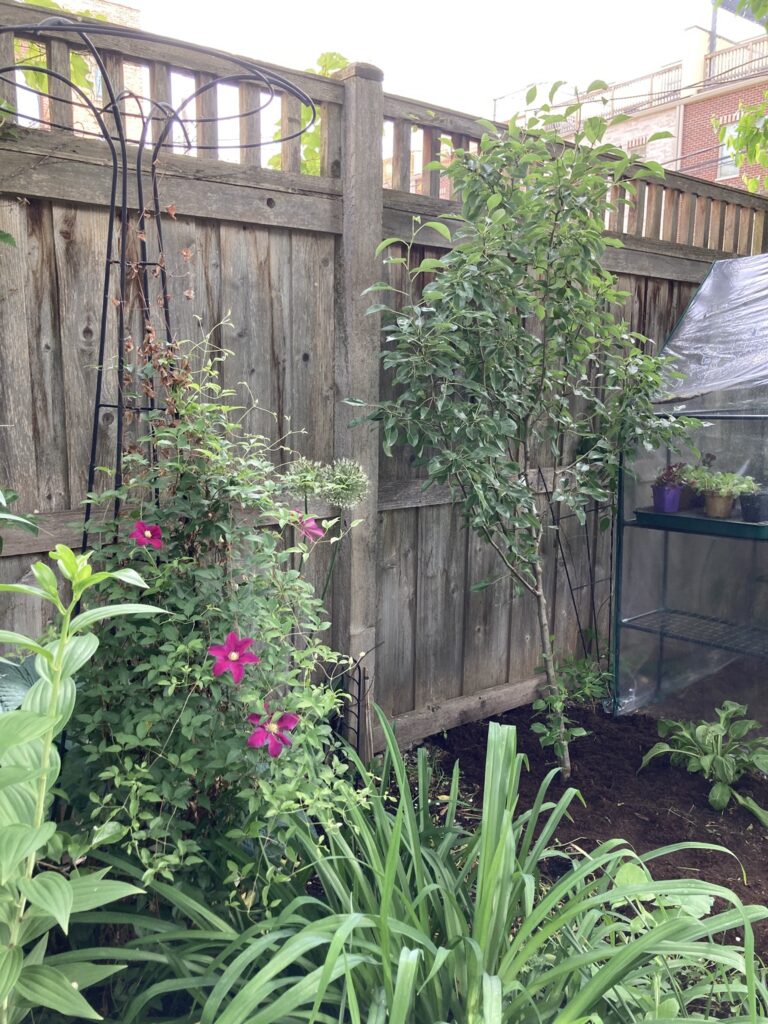