So, I’m trying to write a RPG supplement, and I admit, I’m getting confused in the process. I’d like to write little modules to go along with my Jump Space RPG, essentially suggestions for additional games people can play in the universe, once they’ve played through the main game. Clear?

If it’s being read by everyone playing at the table, then I’m not sure how to build suspense into the scenario — it feels like if I put in explicit plot, then I kind of take the main choices out of the players’ hands, and where’s the fun in that?

(Also, should I present it in this order, or have the setting before the scenario, to set the scene? This is a supplement to the main Jump Space game, so they’d already have several pages on the universe as a whole.)

Normally, no one on this planet would be able to afford to commission your ship’s crew for an event, but the governor of Ariel has authorized a Founders’ Day celebration, marking the fiftieth anniversary of the colony’s founding. She’s hired your crew to provide a reception for the leaders of the colony and their families, about two hundred people. You’ll have support from local chefs, florists, and performers, but are expected to bring dazzling innovations and off-world delights.

This module requires (1) chef, (1) horticulturist, and (1) dancer. One of you must also be willing to try using a jet-pack to fly.

• Scene 1: You arrive on the planet and get right to work, meeting the governor and her family (a wife and three teenage sons). The contract specified that one of you must try flying on Ariel, so that you can report back on its wonders to the rest of the galaxy when you leave. Which of you will go with the governor’s youngest son to Tourists’ Canyon, to be fitted with a jetpack and taken on a wild ride? (At least one, but potentially all. If you are a dancer, you may want to experiment with dance in mid-air.) Will you strip down naked, as he suggests, for best aerodynamics? When he gets flirty, how will you respond, bearing in mind that you don’t want to offend the client, or her son? If any choose not to fly, they should get to know the rest of the kitchen staff, and may hear that the youngest son has a rather problematic reputation. “Spoilt,” “wealthy,” and “entitled” are words that get thrown around behind the scenes.

• Scene 2: You begin setting up for the first event, a reception for the invited guests. At the reception, things go smoothly at first, but then guests start acting very strangely. Many become loud, somewhat belligerent, and sexually demonstrative. One of them attempts to kiss one of your crew – respond as you like! Some leave, declaring that it’s the perfect night for flying (night flying can be quite dangerous), resisting all attempts to dissuade them. Your crew is drafted into trying to help manage the guests – interestingly, only humod flyers seem to be affected, so your crew is entirely fine. Unless some belligerent guest lands a punch…

• Scene 3: Your crew is hauled up before the governor and planetary council (a grandiose title, given the size of the community, but anyway) and accused of poisoning the guests. Word arrives in the midst of the accusation that one of the night flyers has managed to crash himself into a cliff wall, and has died. Your crew is threatened with arrest and imprisonment – not that Ariel has a real prison, but they’ll manage something. If you manage to protest your innocence and hold off the authorities long enough, discussion will eventually reveal the truth, that the governor’s youngest son has essentially ‘spiked the punch.’ He jiggered the order list for supplies, so that your crew has inadvertently brought in and used ingredients that he knew would have a hallucinatory effect on the humod flyers. He thinks the whole thing is hilarious – or he did, until the death.

The planetary council will apologize, and offer to send you on your way with handsome bonus if you will refrain from discussing these events in the wider galaxy – the decision on whether to accept their offer is up to you.

Ariel is a low-gravity planet, with steep cliffs and complex wind patterns; modified humans (humods) have genetically adapted themselves to glide there, and with practice and skill, can come remarkably close to flying.

(By attaching small thruster jets to backpacks, humans can come even closer to true flight, but that’s severely frowned on by the majority of Ariel’s flyers, since joozers (jet-users) have a bad tendency to cut across typical flight patterns and make life harder for everyone. The jets aren’t technically illegal, but there’s so much licensing wrapped around getting one that most people don’t even try. Besiders, most agree it’s much more thrilling being solely humod-powered; there’s no thrill in using a jet.)

Ariel has no native sentient life, and is overall hot and dry; much of the planet resembles Bryce Canyon in what was once Earth’s state of Utah. Agriculture is difficult, though there are some genetically-modified human crops that can be grown successfully there – enough for a fairly limited diet, with imported supplements. Humans and humods have only been on Ariel for two generations, and there are some concerns about long-term effects of this diet on their health, but the thrill-seekers who come to Ariel are generally unworried by such potential issues.

Most of Ariel’s flyers are also nudists, which can be something of a shock to visitors. They prefer to be ‘naked as a bird’ when they fly, which also helps with avoiding overheating. (There’s a cooler season, and cooler regions of the planet, but humod settlements cluster near the best flying cliffs, and those are mostly high altitude and quite warm.)

The prime landing spots at cliff-base host small marketplaces (similar to Old Earth souks) where flyers can rent a wrap for the walk home (or rent a ride on a bullock-cart if they’ve overextended their own strength). Wraps may be returned at kiosks at the top of the cliff. Disposable wraps would be a dream, but at the moment, Ariel’s economy can’t support that kind of luxury.

Families survive through small-scale farming (kitchen gardens) and hunting of ubiquitous flying insects and small birds. As the saying goes, “You’ll have to eat a thousand-peck of insects, if you want to live on Ariel.” It’s not the catchiest saying, but at least it’s accurate.

There’s essentially nothing in the way of industry yet, aside from the spaceport, and no real cities or even towns. Ariel hosts about fifty thousand residents and quite a few tourists. The latter of whom come to gawk at the humod flyers and rent a jet for carefully supervised use in Tourists’ Canyon. They sometimes try to beg a ride from a humod – how thrilling! – but since humod bones are lighter and thinner than human, the physics generally doesn’t work out, and the tourist must give up, disappointed.

Every day at sunset, a troupe of flyer-dancers perform with colorful trailing pennants in the Green Canyon (‘Green’ indicates ease-of-flight here, and is also where beginners go to train); a percentage of their profits goes to the nascent government, and is used to support the growing tourist industry. 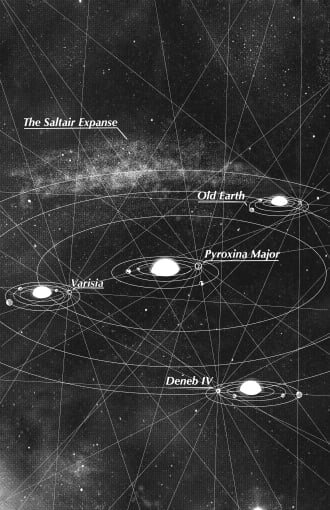