I was going to have a clurichaun in my next Wild Cards story, a mythological character who’s historically been portrayed as a terribly dressed little man, merrily drinking, lecherous. Sort of a grown-up leprechaun.

In a lot of ways, this figure seems similar to the Pan figure of Greek mythology. But I’m now having squiggly feelings about whether it’s also a racist caricature of the Irish — the heavy drinking, animalistic sex, less than human creature seems like it easily feeds into that.

On the one hand, maybe it predates that kind of Irish-directed racism? I’m not sure how old the legend is. Of course, the Irish were colonized for about 700+ years, so it’d have to be pretty darn old to pre-date it.

And on the other hand, maybe it doesn’t matter if it predates colonization — I’m not sure I can write that figure into a story right now without it reading as racist caricature. Maybe another writer could, but I think I’d rather leave that attempt to Irish writers, rather than stick my oar in.

I think I’ve answered my own question — I’m going to go with a different mythological figure. But leaving this up, in case it’s of interest, and would be particularly curious to hear what Irish readers think of it. (Both Irish in Ireland, and Irish diaspora folks.) 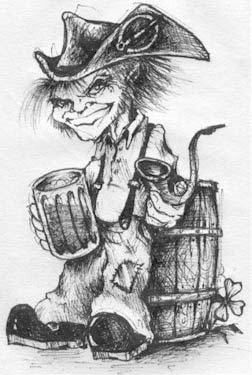