Shall we play Spot the #Spacecats? 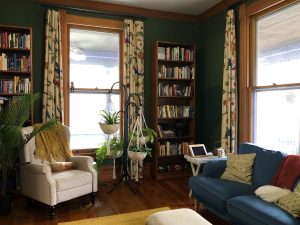 While Stephanie was working hard packing up Feast, I took a break to have a conference call with Margaret Treanor Frey about our ongoing comic project (we are tired, so we are taking a few weeks off for the holidays, hoping to come back reinvigorated!). We also talked about Serendib logo design (she’s going to advise Kavi on further steps to take the design process further, and then help clean it up into a final result, which I am very excited about).

I also assembled a much-needed IKEA end table. It’s nice that the tray lifts off, so you can use it on, say, the ottoman there, and still have an end table. That’ll be useful, I think. In theory, it’s also nice that the tray table is foldable for storage, though I think for us, we’ll probably mostly just leave it right there for the next decade, at least.

I’ve been thinking of this front room as the garden room, filling it with plenty of plants, with animals and flowers on the curtains, etc. (I hope that big new IKEA palm gets enough light there; fingers crossed.) There’s something about the tray table that has a certain outdoor / conservatory aesthetic, I think, but I can’t really say why!

We need a little more light in that room (it’s fine now, but dark at night), and then we might actually be able to call its transformation from playroom to sitting room complete. The (older) kids (and of course, the cats) are making much more use of it in this form. If we start up writing days again, or do a SLF writing retreat here, this will also be a functional space for multiple people to work in. Good.

One decade in this house, down. Eep.