On the one hand, I had a really great teaching day yesterday. In my creative writing class, we critiqued two strong stories, that won’t need much more work to get to publishable shape — mostly a matter of cutting out much of the first third (when the writers were figuring out what the story was about), and then honing generally, making each sentence more effective, so they land with maximum impact. Both students have shown notable improvement from previous stories, which is super-satisfying as a teacher.

AND then it turned out that NONE of my students had seen The Good Place, so I got to assign them to watch the first episode, at least, and we will spend some time in Thursday’s class talking about metafiction and what exactly they’re doing in that show. Which also means I get to re-watch the first few episodes today. For my JOB! (Photo is from my friends Valya and Stephen’s new unabridged Good Place cookbook, _Forking Good_ — fun holiday gift.) 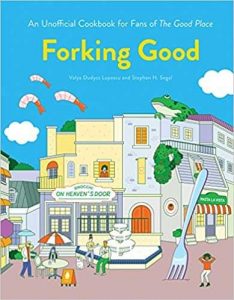 And in my lit. class, we’re reading Ancillary Justice, and the poor munchkins were SUPER-CONFUSED, six chapters in, so I spent a while unpacking what Leckie’s doing with gender on the whiteboard, and when they were STILL confused, we talked a bit more about the ancillaries and how they function as ‘slave bodies’ for the AI ships. Sort of. (This book may be a bit challenging for a 100-level class. I may save it for 300-400-level in future.)

Talking about twins helped bridge the comprehension gap a bit, I think, and then that led us to the concept of having consciousness in multiple bodies, which led to such topics as the search for immortality, the current practices of transfusing young blood into old people to keep the old people healthier, ditto organ trafficking, the situation with the Uighurs in China, how all of that intersects with class, wealth, and race, and whether they would actually want to be uploaded onto the net. This book actually would work really well in my post-colonial lit. class too.

On the other hand, today is Trans Day of Remembrance, and I sent my gender & sexuality in lit students an e-mail telling them about it, in case they didn’t know why we spend so much time talking about gender. Some people are violently, tragically invested in enforcing gender norms.

Sometimes I wish I could just talk with the munchkins about all the exciting, happy, complex and nuanced possibilities of the future. But this part, this is also my job.